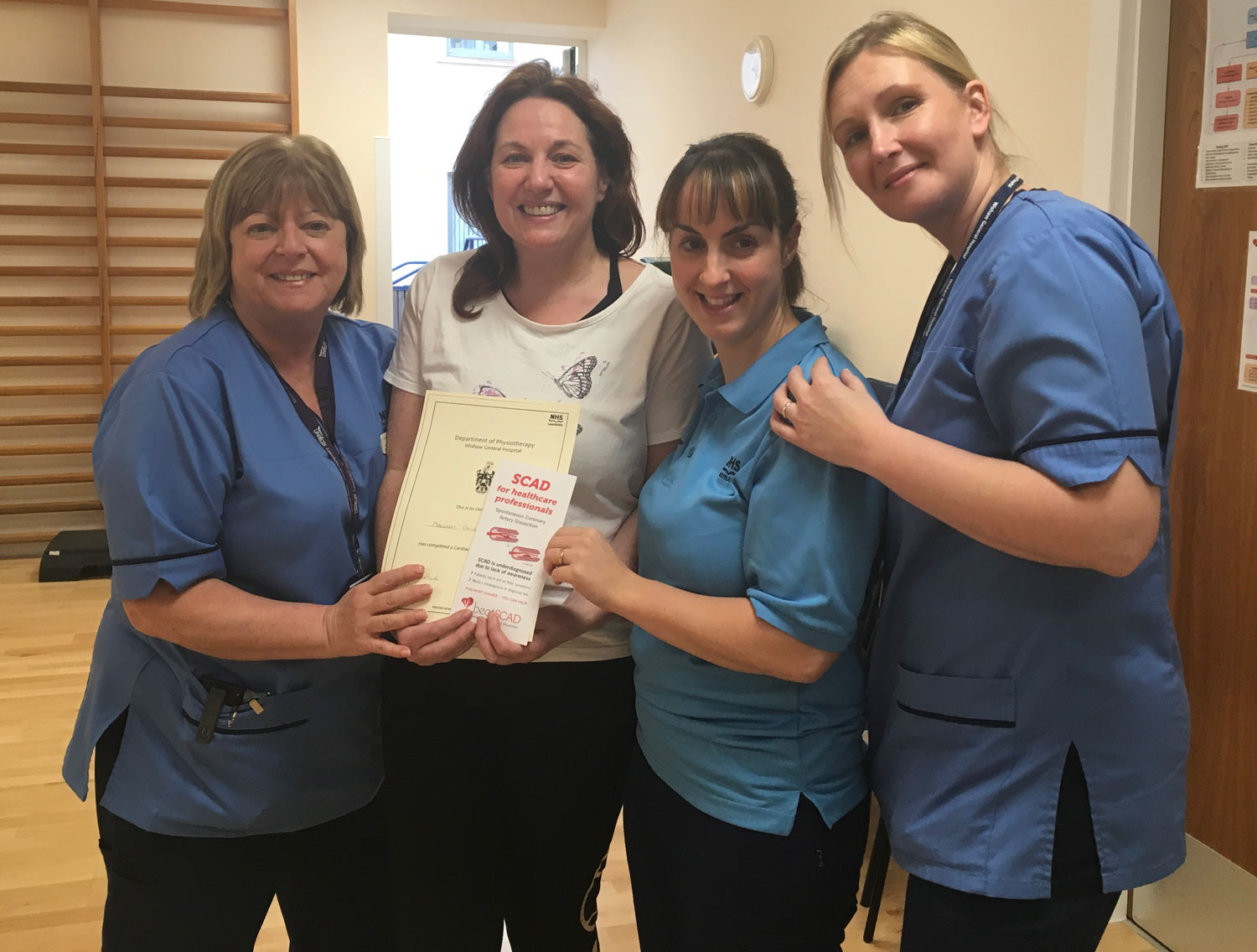 On 15 May 2018, I managed to fall spectacularly down an embankment while walking in the Lake District and badly dislocate my elbow. It was a horrible accident. I was in a difficult to access location which meant the ambulance had to come by road and ferry which seemed to take a lifetime. However, one plaster cast at Lancaster Hospital later, I was back in the holiday cottage feeling fine.

The next morning I collapsed. My husband Stewart is a police officer and he revived me. I was so incoherent and confused he thought I had had a stroke. I had no pain, but felt very sick. I didn’t know where I was – I actually thought I was under a tree in the sunshine on the shores of Windemere. I was warm, happy and sleepy.

Stewart called 999, the ambulance arrived quickly and the paramedics spent about 20 minutes trying to stabilise me before taking me to Lancaster Hospital where I was told very gently that I had had a heart attack, and that the team needed to get me to the Royal Vic in Blackpool as soon as possible.

A heart attack – but that wasn’t possible? I was fit, healthy, happy. I had no heart, blood pressure or cholesterol problems. I was in shock – I can remember minute details so vividly: the young blonde student nurse taking my hand to comfort me, the paramedic with the Liverpool accent saying she was a great driver and she would get me to Blackpool quicker than anyone else.

It all happened so quickly. I was taken straight in to the operating theatre at Blackpool. At one point I remember the surgeon showing me what looked like an x ray telling me I was going to be OK, I had no blockages, my heart attack had been caused by a Spontaneous Cardiac Artery Dissection. He had seen one before. I was going to be in intensive care for the next week or so.

Later that day he told me about a Dr Alice Wood at Leicester and the work she was doing, and that she should be contacted. He had also contacted my local hospital in Scotland and had arranged for the cardiac rehab team to also contact them.

It’s only now I know how lucky I was to be treated by a team with such a good awareness of SCAD. The level of care at Blackpool was excellent and given with such kindness. They explained that so little was understood about SCAD. Dr Wood emailed me while I was still at Blackpool and that started my journey of learning how to live with a rare disease.

I’m unbearably cheerful and often described as a born optimist. I blame my dad’s side who are from Dublin. I’ve also always had a strong belief in God. And for the first few weeks I really needed all of that. I was literally floored, I was so weak and for the first time in my life totally dependent on others. I spent about 10 days in the Coronary Care Unit and then travelled home, still recovering from the accident and in plaster while trying to work out if what I was feeling was ‘normal’. Should I go to A&E with those pains or not?

Once I was home, I saw how serious the situation was reflected in the faces of those I love. I kept telling everyone that I was a million times better when I clearly wasn’t. I didn’t want them to worry.

Then two things happened. I read a newspaper story about a girl called Jennifer Heenan who had walked the West Highland Way  – because she had had a SCAD. It reminded me of an email from Dr Wood which had mentioned a charity and Facebook group.

The silver lining to my cloud started to appear

I contacted one of the charity’s trustees, Debbie Oliver, and the silver lining to my cloud started to appear. For me finding the Beat SCAD community was a real turning point. It wasn’t just the practical advice, it was the sense of not being alone with this any more.

As I come from a large family, live in a very close-knit market town and have been married for more than 30 years, the idea of being isolated or alone was alien to me. But no one could understand what had happened to me more than someone who has been through it.

Debbie put me in touch with Jennifer and her twin sister Karen and we met up for coffee and cake. And lots of practical advice, good fun and a new friendship. They were both great. Jennifer, who is the SCAD survivor is such a bright positive person with a busy interesting life. She gave me so much hope for the future.

The other thing that happened was that my GP who had actioned the formal referral to the team at Leicester had also noticed that Dr Wood in one of her emails had recommended cardiac rehab, which I discovered later may not have been an automatic referral for “someone like me”.

From the first clinic appointment I benefited from meeting the rehab team. During the appointment it was like floodgates being opened. They were genuinely interested in SCAD and listened to what was happening to me. I don’t know how much time had been booked for the appointment but they were going to give me all the time I needed.

Prior to SCAD I did boxercise at a professional boxing gym three times a week, yoga, and hillwalking. At my first rehab session, I realised I was frightened to move. And some things I just couldn’t do. I was shocked that I couldn’t run for one minute when I used to run just for fun. The session itself was a lot of fun with singing and dancing (mainly by Ann-Marie (cardiac rehab lead) to Abba and Barry Manilow) but underneath that I felt that a safe place had been created.

I opted to do two sessions per week and I realised that on a Monday and Friday I would be checked out if I had any niggles. I could discuss any bad days honestly. On a Monday we had additional talks and prior to my SCAD I would have said I was fairly knowledgeable about fitness and nutrition, but I learned a lot. I reckoned it couldn’t do any harm to look after myself!

My confidence increased as the weeks went on. We worked in pairs and it was so interesting to hear everyone’s story. The rehab team created a really open, friendly atmosphere so it was easy to talk.

Then out of the blue, one day I was just dancing like no one is watching! It was a moment of experiencing the sheer joy of moving – I love to dance. I wasn’t afraid.

All of the rehab team, but perhaps Ann-Marie especially had the type of professional experience or sixth sense to know how you are feeling, and to ask the right questions at the right time. I always knew that behind the fun there was a high level of professional care and ability.

However, I was surprised and delighted by their level of interest in SCAD and wanting to inform themselves so they could help more. Ann-Marie looked on the BeatSCAD website and the team waded their way through research papers, most of which came from trustees Karen Rockell and Debbie at BeatSCAD. I began to understand what a vocation was.

I realised I was in mental rehab too and by week 5 was beginning to notice positive things from SCAD.

As my confidence grew I realised I was in mental rehab too and by week 5 was beginning to notice positive things from SCAD. My life was different now, I was different. But I didn’t die, I’m still here. I have a great life and even with bad days, I wasn’t going to be afraid of the future. In some ways, it was like the film ‘It’s a wonderful life’ where we begin to realise what we are to others and what they are to us. My only regret when I was having my MI was that I hadn’t told so many good people what they had made my life. Post SCAD I had the chance. Family, friends, neighbours and colleagues were all there for me.

With true Glaswegian humour, Lorna, who has been my friend since we were two years old, some 54 years now, wrote to me saying “The cords between us will never be broken  we are still joined at the heart even if yours is a bit battered.” She made me laugh and cry at the same time.

I saw very clearly how busy my life had been, maybe now it was time to take some time. By week 7 of rehab I began to accept what had happened to me mentally and emotionally. I was looking forward to my new life.

I don’t know what the future holds. I’m now on a different path with new people, priorities and experiences – but I’m so excited to see where it goes.