I was peri-menopausal but still a keen cyclist, very accomplished horse rider and I was as fit as a fiddle. My only vice was I was a roll-up tobacco smoker and, although I used filters, I had plans to stop. I just didn’t know when!

On 24 April 2018 I had a very traumatic cycling accident. I was cycling home from the town centre with my shopping in my saddle bags and it was raining heavily. As I entered a double roundabout, I noticed a car approaching the junction to my left and thought it was going too fast to stop.

My reflexes just kicked in. I was either going to wind up under the car’s bonnet or flying over it, so I jammed on my brakes. My rear bicycle wheel reared up into the air, my back cracked but I managed to adjust my position to get the back wheel down back on to the road surface (horse riding skills there!) I then skidded sideways into the bonnet of the car landed on my side with my feet still on the pedals. My right leg was trapped and the car suddenly braked when the driver realised what had happened.

I was in a deep state of shock and I was so shaken up nobody could get much sense out of me. One of the witnesses obtained the driver’s details for me and asked me what I wanted to do.  I said, “I want to go home and have cup of tea!”

The next day I physically could not walk. My back was severely damaged as was my right leg.  I managed to get to the doctor two days later to be checked out. I was out of action for weeks and had to have intense physiotherapy.

Exactly four weeks later, on a sunny morning in May 2018 I was awoken by the sound of very heavy running water. I could not understand it as the sun was shining through my window. I opened my window to check that I was not going mad and noticed that the overflow pipe was pouring out hot water onto the ground below.

I hobbled back upstairs and to my horror I noticed water beginning to gush out of my built-in wardrobe. I realised that the water tank had blown. I tried not to panic and hobbled downstairs to switch off all the electrics. It then took me two hours to get through to my landlord, during which time water was gushing through the ceiling of my lounge downstairs and through all the light fittings. I felt completely helpless. There were towels, buckets and bowls all over the place to catch the water and I was under intense physical and emotional trauma constantly emptying buckets with an injured back!

The landlord arrived two hours later and was devastated, but started making calls to repairers and at 2pm a workman with a water suction device arrived and began to drag the water out of the carpets.

At that point the trauma hit me. I remember excusing myself from the workmen and I went to the nearby field where I just burst into floods of incontrollable tears. I had had enough. I could not get hold of my mother but managed to get through to my boss as I had not logged in that day to work. My boss was fantastic and managed to calm me down. She advised me to call my insurers and to take as much time off as I needed until things were resolved. I did that. All my property was ruined, with the exception my lifelines – broadband, laptop, phone and television!

The anger and emotional stress I felt was incredible. I was not sleeping. Weight began to fall off me and I did not need to lose any. Due to chronic insomnia I was unable to work but my boss told me to still take as much time as I needed.

I was still dealing with the aftermath of this disaster in late August 2018 and I still could not sleep. When new carpets were due to be fitted, I had to lug all my furniture out and back into the house by myself, including dragging my mattress down and up the stairs. I remember thinking it was going to kill me… it nearly did!

On Saturday 1 September I cycled into my local town for shopping and noticed some weird chest pains in the left-hand side of my chest. I put it down to hunger, so I bought a sandwich, a cappuccino and sat down to eat it before I cycled home.

On Sunday morning, 2 September, about 5am I suddenly began to feel a dreadful pain in my left arm, breathlessness and chest pain. It felt as though someone was shoving a metal rod up my arm and I could not breathe. I immediately dialled 999.

The person who took my call told me an ambulance would be on its way, but she could not stay on the line as the call centre was too busy. The heart attack stopped. Gently, I got some clothes together in a rucksack and waited. Then I had a second heart attack. I redialled 999 and was told an ambulance was on its way. Stupidly I had a smoke to try to ‘calm me down’ and that just made me feel sick, so I stubbed it out.

I was hot and clammy and desperate for help. I had left my front door wide open for paramedics. At 6.16am I began having another and much more severe third heart attack and suddenly the ambulance crew burst through my door. The situation was truly horrific. I could not speak, I could not breathe and the pain in my chest was so strong. I thought I was going to die.

The ambulance crew kept telling me to calm down as I was having a panic attack. My left arm was extended, and I was clutching my chest. It lasted about 10 minutes. When I was able to talk, I told them I was not having a panic attack, and this was my third heart attack. I wanted to believe them, but I could not. I have never experienced a full-blown panic attack in my life. I got very angry with them. They were not seeing what was happening to me which was a clear heart attack. Finally, they loaded me into the ambulance, and I was crying my eyes out.

I was admitted to A&E upon arrival and they began to take my bloods. I was then moved to a ward, where I was told quite bluntly that I had had a heart attack. I didn’t want to hear it. I am too young, too fit and had spent some fantastic times galloping on my horse and excelling in my job. I could not take such blunt news and I burst into tears again.

I was so angry and blaming myself as I thought it was my former lifestyle that had caused this. Not so. I was reassured by the cardiac team that this was not the case. I spent 2-9 September in Blackpool Victoria Hospital and did not sleep a wink and lost so much weight I looked anorexic.

I went for my angiogram which I was freaking out about, so I asked to be sedated. Even that didn’t calm me down. The angiogram showed an 18mm tear in my LAD caused by Spontaneous Coronary Artery Dissection (SCAD). 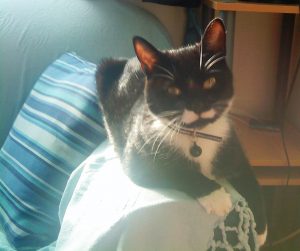 When I finally got home I was delighted to be reunited with my soul mate, Lucy – the most friendly and affectionate little rescue cat I have the luck to be owned by! She was so offended when I went upstairs to find her. She thought I had left her and was furious. It took five minutes to bring her round that I had not left her and never will.

The recovery process has been so slow. It’s March 2019 now and I still get chest pain, which is expected for SCAD survivors, according to SCAD specialist Dr David Adlam of Leicester University.

When I got home, I found myself so angry. I know there are different stages of grief, as explained by Dr Abi Al-Hussaini, cardiologist and SCAD specialist based at London’s Chelsea and Westminster Hospital, and I’d certainly passed the ‘denial’ stage and moved on to anger.

I found the SCAD UK & Ireland Survivors Facebook group and have been given a lot of reassurance and advice there, so thanks to the wonderful people who set it up. I also give back to the group.

I am definitely in the acceptance stage now. I listen to my body and tend to be one of those ‘bull in a china shop’ people. One of those people who hates being late and will get from A to B as quickly as possible. When I have over-done it, I need a rest day.

I am still deeply traumatised by the whole chain of events and am waiting to be seen by a psychiatrist who is the only person who can refer me to psychology treatment to deal with everything that has happened.

I still cannot believe I survived this, and I am so grateful to the Facebook group and to Beat SCAD.

I am now getting my cardio fitness back by getting back on my bike. And I have finally received written confirmation that I can get back on my beloved horse, Ralph, again. Once I do, I will put all this behind me as the worst nightmare I have ever had. However, I will continue to help others in the Facebook group and ask them for help as well. How I long to rip up some turf again on Ralph! 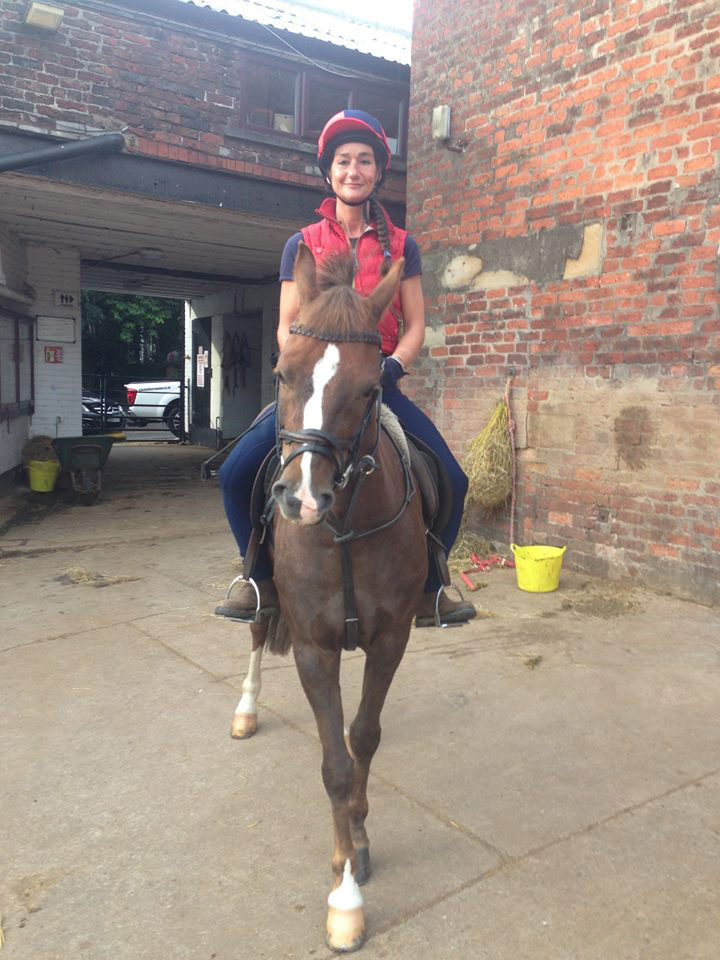 I am too young, too fit to have a heart attack, and have spent some fantastic times galloping on my horse and excelling in my job.

I am definitely in the acceptance stage now. I listen to my body and tend to be one of those ‘bull in a china shop’ people. One of those people who hates being late and will get from A to B as quickly as possible. 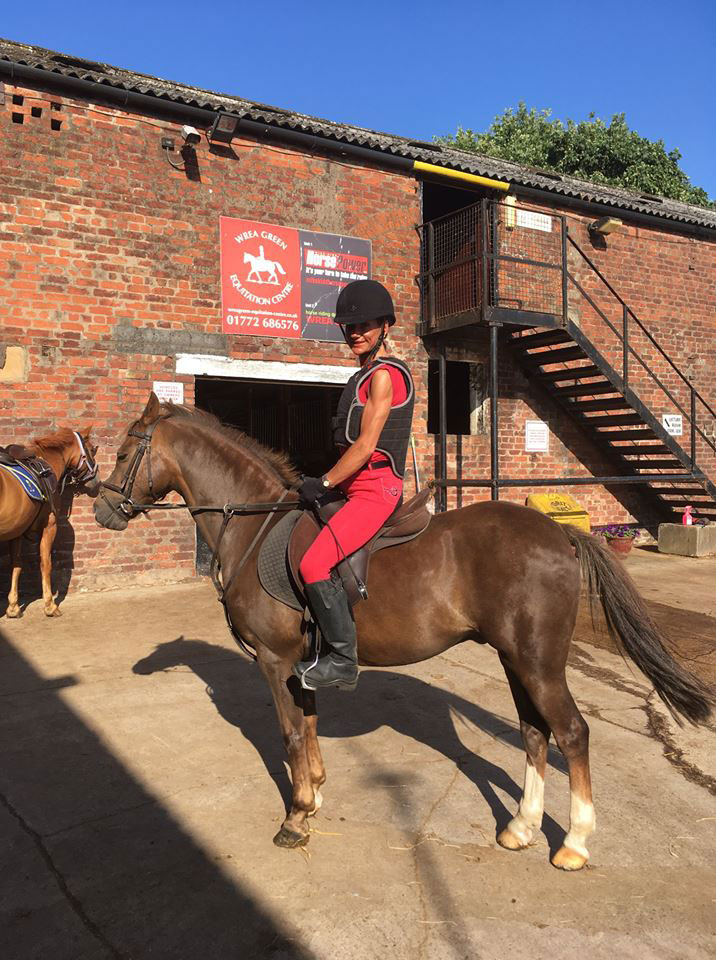 Once I get back on Ralph I will put all this behind me as the worst nightmare I have ever had.