Wednesday 23 June 2010 was a beautiful sunny day. England were going to play Slovenia in a world cup match and so my husband Simon had travelled from our home in Derby to work in Nottingham by bus intending to go out to watch the match and have a few drinks after work.

I dropped our son Samuel at his nursery school in town and came back home to do some jobs before I picked him up at lunchtime. I cleaned the house and hung a load of washing out before I went to collect Samuel. Samuel was 3 at the time and is our little miracle man having been born with a rare genetic condition called Mowat Wilson Syndrome which means he has a severe learning disability (he doesn’t talk), epilepsy a bowel disorder and other physical difficulties, at 3 he was only just beginning to take his first few steps, he also was born with a congenital heart defect – absent pulmonary valve syndrome and underwent open heart surgery when he was just 5 months old.

I arrived at nursery and Samuel’s one-to-one support told me he’d had a lovely morning and gave me some fairy cakes they’d baked. I found Samuel in the singing room and picked him up, carrying him through nursery and into the reception. Suddenly I felt a severe crushing pain in my chest, I tried to carry on walking out of nursery thinking to myself if I can just get to the car and sit down I’ll feel better. The pain intensified and I realised I couldn’t make it out of the nursery. I remember saying to the person on reception ‘I don’t feel very well, could someone take Samuel from me’, I can’t remember who took him but they said “ it’s a hot day just sit down and we’ll get you a drink of water” to which I replied “no, I don’t want to sit down I want to lie down” . I then lost consciousness for how long I’m not sure. The next thing I was aware of was someone on the telephone saying “she’s grey and she’s twitching a bit, we think she may have had a fit”. I tried to speak to ask about Samuel but was slurring and couldn’t get the words out. There was a paramedic there, I was covered in sweat and the pain was still crushing in my chest. The paramedic did an ECG, she seemed concerned about the reading but didn’t give anything away, gave me an aspirin and a clot busting injection. When the ambulance arrived the paramedics commented they were expecting a much older patient based on the information they’d received and thought my age had been input the wrong way round and I was 73 not 37! The nursery staff were amazing and one of Samuel’s key workers accompanied me to hospital in the ambulance – I don’t think they’ll forget the Mum who had a heart attack in the office though!!

I was taken to A and E and seen immediately, they took blood and ran some other tests and after a while the chest pain subsided and I was feeling much better. The doctors explained that they needed to rule out a number of things and would be sending me for a chest x-ray and CT scan but reassured me that they really didn’t think it’d be anything serious as I was young, healthy and looked too well! One particular Dr was particularly dismissive and wrote ‘unremarkable’ on my notes. When I asked him about the changes the paramedics had seen on the ECG he said that can just happen sometimes – nothing to worry about! I got the feeling he thought I was an over-anxious woman who had just fainted. Things changed a bit when the chest pain started again and I was struggling to breathe. A further ECG showed the same changes as the first one, also what I know now to be the troponin test results must have come through showing damage to my heart. At this point I was moved to the coronary care unit where I spent the next 12 days. 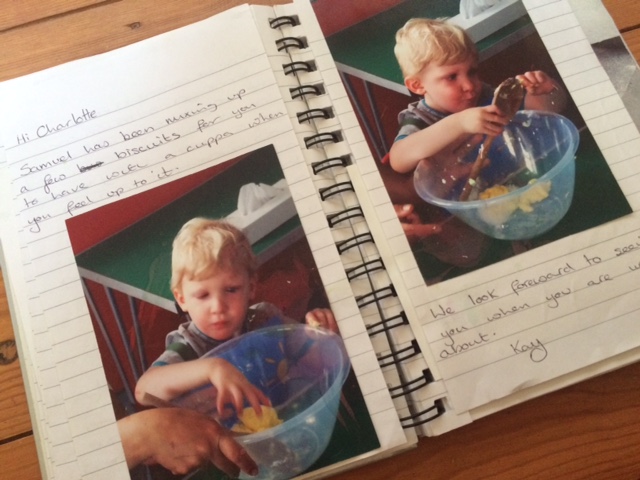 “The cardiologist on his rounds told me I’d totally baffled him, the cardiac specialist nurses told me they didn’t think it would turn out to be anything to do with my heart.”

It was hard being on coronary care, at that time children weren’t allowed to visit, Samuel’s nursery were brilliant and sent me lots of photos and a book about what he was doing every day but I missed him and worried about him all the time. The cardiologist on his daily rounds told me I’d totally baffled him, the cardiac specialist nurses told me they didn’t think it would turn out to be anything to do with my heart. I just didn’t fit the profile of the typical heart patient. One nurse told me she thought I needed to get up and walk around more, I took her advice but started to get chest pains again, in fact I was continuing to have intermittent pain. I was told I was due to have an angiogram but was not considered urgent so several times I was on the day’s list but then not sent for.

Finally they came to take me down for the angiogram, I felt very nervous although everyone had reassured me that all would be fine and at worse they would just need to ‘pop a stent in’. My Mum lived in Ireland at the time and I’d told her not to worry about coming over as after the angiogram I’d be home anyway. During the angiogram I experienced chest pain again, everything was quite light hearted at first until the cardiologist said “this is very unusual, I’m sorry but I need to go and speak to a colleague, I need to get a second opinion”. When she came back she explained that my left main artery had torn and her colleague agreed that I should be transferred to Leicester or Nottingham for emergency bypass surgery. Simon got to the hospital just after I’d come out of the cath lab I told him what the cardiologist had said and asked him to let my family know. I also asked if Samuel could come to see me as there was no way I could go for heart surgery without seeing him first.

The staff’s attitude totally changed after this, rather than being told to move around more I was told not to and had to have someone with me when I went for a shower. Because of some of the medication I’d been given they weren’t able to operate straight away so I stayed in Derby for another couple of nights before I was transferred to Nottingham. It was strange being in a different hospital, I’d got to know the staff at Derby and I felt a long way from home in a new and strange place. The day before the bypass a nurse came to speak to me and another couple of ladies who were also due for surgery, they explained what would happen, that we would be ventilated and in intensive care after we got out of theatre and talked about the wires and the chest drains we would have. All this brought back the horror of Samuel having heart surgery and seeing my tiny baby in ITU covered in wires and ventilated, unfortunately I know only too well what a heart surgery patient looks like.

The day of the surgery arrived and I was taken down to theatre just before lunch, all I could do was hope that it would go well and trust that I was in the best possible hands and I would see my loved ones again. I had no choice but to have the surgery and without it I knew my life was at risk. All did go well and by that evening I was breathing on my own so came off the ventilator. I recovered fairly quickly and within a few days managed to cough and walk a small flight of stairs so was able to be discharged. Because of our situation at home it was agreed that I could only be discharged if I stayed at my Dad’s house for the first week or so, I agreed and after a week there returned home.

It was a difficult time; I couldn’t drive for a month or lift Samuel for 3 months. Samuel didn’t understand and got upset and cross which made me feel guilty and sad. Simon had returned to work and although we had some support from family and friends as well as Samuel’s nursery it wasn’t enough to cover all the times I needed someone else with me so we had to arrange some additional support from social services. It was hard going recovering from surgery as well as having strangers in the house doing things I wanted to do.

Time is a healer and as the days passed I got better physically and emotionally and eventually returned to work and got back to doing all the things I was doing before SCAD. Cardiac rehabilitation and meeting other SCADsters helped me get my confidence back and feel like I wasn’t the only one that had experienced this rare condition and the love and support of my family and friends helped my broken heart heal in every way

“Cardiac rehabilitation and meeting other SCADsters helped me get my confidence back and feel like I wasn’t the only one that had experienced this rare condition.”

As I write this I am signed off from work following a second SCAD on 12 December 2015 this time it occurred in a branch artery and is being medically managed so fortunately I haven’t had to go through the trauma a heart surgery again. It has brought back many of the feelings from 5 years ago and made me realise that there is still much needed to be done to raise awareness of the condition as despite my previous history many of the doctors in Derby were convinced it was a case of indigestion until the troponin results came back.

However, the research team at Glenfield were wonderful and I can’t thank them enough for their support. Five and a half years ago I struggled to find any information on SCAD, today it’s a different story with the research, Facebook support and the Beat SCAD charity and for that I’m very grateful. It’s brought back some of the fear and anxiety of whether it’s going to happen again and I’m feeling fragile, but my first SCAD taught me life is precious and can change in moment. None of us know what’s around the corner (perhaps it’s a good job we don’t!) and it’s important to enjoy the everyday things in life.

After my first SCAD I half hoped for some kind of epiphany – a life-changing moment when I’d realise I had to fulfil something really big like climbing Everest or having a complete life change, but I realised that all I really wanted to do was to spend time with the people I love, to enjoy being in my home and the everyday things in life, a chat with a friend, a meal with my husband, seeing my beautiful son’s smiley face when he’s enjoying a bus ride.

I’ve done loads of brilliant things since my first SCAD, celebrated birthdays, been on holidays, spent happy times with family and friends and got married and I’m determined to carry on enjoying life this time. SCAD is bad but life is good!

“Five and a half years ago I struggled to find any information on SCAD, today it’s a different story with the research, Facebook support and the Beat SCAD charity and for that I’m very grateful.”