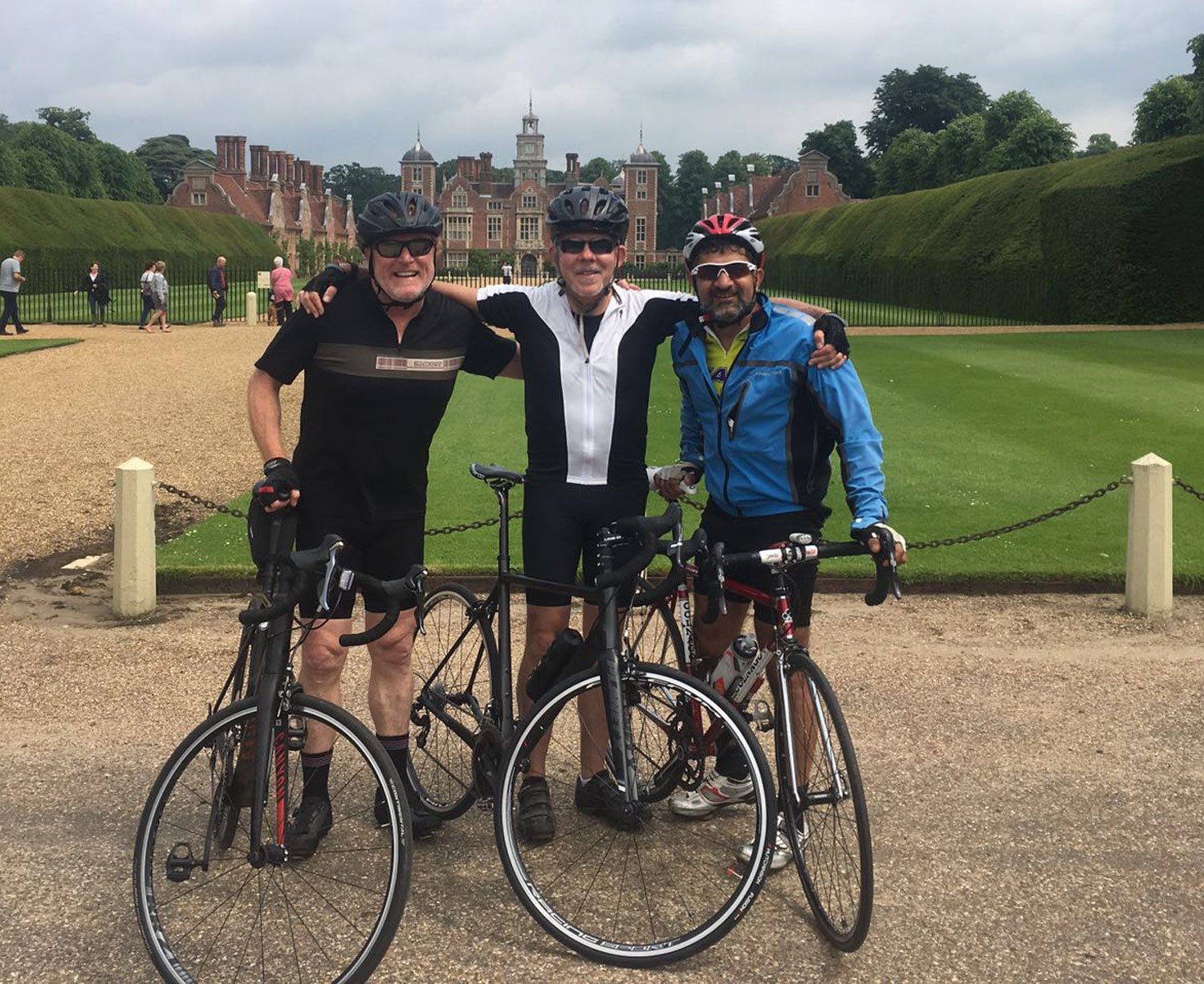 David Lamont, whose wife Michelle has had two heart attacks as a result of SCAD (spontaneous coronary artery dissection), is raising money for Beat SCAD by taking part in a marathon cycling challenge from London to Paris. David, pictured above left, will be joined by two friends (also pictured).

The four-day, 336-mile bike ride starts on 20 July in Croydon and finishes in Paris. The first day takes the riders through Kent, across the channel and to Dunkirk, around 91 miles. Day two’s route is Dunkirk to Douai (69 miles), then on to Soissons on day three, a gruelling 94 miles, and finally to Paris, ending at the Eiffel Tower.

Once the ride is finished, David will have a chance to relax and watch Tour de France races on the Champs Elysee.

Michelle said: “In July 2004 at the age of 40 I suffered a heart attack, followed swiftly by a cardiac arrest. I had in a matter of minutes gone from a fit, healthy wife and mother of three to a heart attack survivor. My heart attack was caused by what we now understand as SCAD although little, if anything, was understood about the condition at that time; indeed my heart attack was put down as a ‘freak incident’ and as such my prognosis was unknown. It was a very dark year for me.

“Time is a great healer, though; my body and life slowly returned to normal. Sadly in February 2009 I suffered another heart attack. I recognised the symptoms immediately, another SCAD, this time in my LAD [Left Anterior Descending artery]. Although undoubtedly another major setback, the difference after this event was that SCAD was starting to be a recognised condition and I was able to connect with others online. Rather than the total isolation of 2004, the growing awareness and network played a huge part in my recovery.

“Katherine Kelly Leon and Laura Haywood Cory had things moving in the USA, the SCAD world was coming together, Rebecca Breslin set the ball in motion in the UK and important global research is now under way. Long term I remain optimistic that medical advances will reduce the incidence of SCAD. In the meantime, though, just being networked with other SCAD victims is in itself a tremendous comfort!”

David added: “We are so lucky and grateful that Michelle survived both [SCAD] events, but also extremely keen to help raise money to fund important research now under way to improve our understanding of the condition and hopefully reduce the number of people (predominantly young women) who suffer from it.”

Rebecca Breslin, Chair of Beat SCAD, said: “Michelle was one of the first UK SCAD patients I met online in the weeks following my SCAD and she has become a true friend offering much needed support along the way. Admittedly, when I first heard Michelle had experienced two separate SCAD events, I was utterly terrified! But Michelle survived those two events, is keeping well, enjoying life and full of invaluable words of wisdom.”

“David is taking on a fantastic challenge,” she continued. “I wish him the very best with the cycle ride and cannot thank him enough for supporting Beat SCAD. I look forward to hearing about his progress – David will certainly be awarded the Beat SCAD ‘yellow jersey’.”

Please support David by giving a donation on his Total Giving page. 100% of the funds raised by David will be put to good use by Beat SCAD, so all donations are gratefully received.

Thank you David – best of luck and we look forward to seeing updates en route!