I was a fit, healthy, 46-year-old Mum of one. No cardiac risk factors. Then I had a heart attack – out of the blue with no advance warning signs. Possible underlying causes included: being peri-menopausal, work stress, migraines. I subsequently received a diagnosis of SCAD and FMD (Fibromuscular Dysplasia).

I’m now a six-plus year SCAD survivor and I take the long view: SCAD stopped me in my tracks. The support of my husband in particular, my wider family, my friends, my doctors and my counsellor were all key to the recovery of my physical and (even more so) my mental well-being.

Once recovered, SCAD showed me that I needed to re-evaluate my life priorities and that personal growth can come from trauma. No-one will ever wish that they had had a SCAD… but my SCAD has brought me close to some wonderful new friends – some of whom are now also colleagues – and the collective strength and wisdom of the wider SCAD community. I have a new sense of purpose for this next stage of my life: the opportunity to make a positive difference in the lives of more recently diagnosed SCAD survivors, and the desire to see a change in awareness, treatment and long-term management of SCAD that will ultimately save lives.

I had just started driving my six-year-old son to a party on Saturday 7 June 2014 when I felt considerable pressure in the middle of my chest. “How very strange” I thought. I stopped driving, got out and stretched to see if it changed. It got worse.

Somehow, I knew straight away that something was very wrong.

I thought about calling my husband or 999 but realised I wanted to get us both back home while I still could. A minute later I fell in through the front door having parked the car outside the house (badly…), my husband was distracting our son (“but why can’t I go to George’s birthday party? It’s not fair!”) with gaming while calling 999.

Our first piece of good luck on this scary day happened next: our wonderful neighbour (a doctor) was just on her way out to her Birthday lunch. She came to look after me as we waited for the ambulance.

As well as the pressure deep in my chest I felt tightness all around it. I needed to loosen my clothes. My arms, particularly the left, ached. I got pins and needles in my left hand. After sitting and leaning forward for a while, I felt a wave of cold clamminess descend and I broke out in a cold sweat. Then I needed to lie down. The cold tiled hall floor felt good against my cheek. I felt nauseous and wanted to faint – which would have been a first for me – but decided I didn’t want to lose consciousness (I was scared that I would die), so fought hard to stay ‘present’. I didn’t pass out.

By time the paramedic, swiftly followed by an ambulance, arrived and I was being assessed I was starting to feel like I was ‘returning’. I was told that I’d most likely had a panic attack (never had one of those before…) and taken to my local A&E – not the nearest heart centre – just “as a precaution, you’ll be home again in a couple of hours”. Nobody mentioned the words heart attack. At the hospital I was hooked up in a bay in A&E and left there. No-one seemed worried about me and I was starting to feel a bit of a fraud – I felt that way for the entire six days I was in hospital.

A troponin blood test (“just to rule out anything sinister”) told the registrar I’d had a heart ‘event’ – probably a heart attack. Not sure who was more shocked – him or me… The patterns of subsequent ECGs backed this up. More good luck for me: the on-call consultant in A&E that Saturday afternoon was a cardiologist. He asked me when I had last taken cocaine (um…. Never…!) – apparently it can cause spasms that cause heart attacks… He quickly realised I had no risk factors whatsoever but still put me on all the ‘normal’ (ie plaque-induced or atherosclerotic) heart attack meds – aspirin, clopidogrel, bisoprolol, atorvastatin – “as a precaution” – there was no protocol for treating people like me.  I was a mystery.

“Query myocarditis, query MI (myocardial infarction or heart attack)” as my notes said. As I got used to calling and texting people saying “Please don’t worry, I’m OK, it’s just that it looks like I might have had a heart attack…” the consultant was busy trying to book me an echo cardiogram, MRI scan and angiogram…

Because I seemed to be well, more urgent cases kept bumping me down the queue for the angiogram – this pleased me no end, though sharing a ward with old ladies dying of advanced heart failure was very frightening.

Five days later, after a vaguely reassuring echo cardiogram and MRI, my angiogram at the London Heart Hospital gave me my diagnosis: a SCAD that appeared to be sorting itself out. Turned out that (more good luck for me) waiting five days for my angiogram was probably the best thing that could have happened – reducing the risk of the catheterisation tearing my dissection further. No stent was required.

The sheer relief of returning home six days after I’d left, sitting in my garden and excitedly waiting for my husband to bring our son home from school was huge. My gratitude at being alive was overwhelming.

The next day I decided to do some cutting back in our garden – against my husband’s better judgement. He was right. I learnt about my new physical limitations the hard way.

That night we dialled 999 again – and got my lovely neighbour round again. I learnt the difference between panic attack and heart attack. I went to A&E as a precaution again and was sent home at 5am (it was the night England exit-ed the World Cup. A&E was not a happy place to be in) – but I was just pleased to be back in time for when my son woke up

While I spent my week in hospital getting tested, and finally receiving a SCAD diagnosis, I was told I’d never meet anyone else like me – how wrong that doctor was! Within weeks I found information about the Mayo Clinic and a SCAD Survivors Facebook page with 600 members (there are now – in October 2020 – more than 4,350). In 2015 a UK and Ireland SCAD Survivors page was set up and that now has more than 830 members.

My initial physical recovery took several months – absolute exhaustion, chest pain, arm pain. Unable to lift anything. Had to sleep every afternoon. Adjustment to medication regime took time – there were many side effects.

Mental recovery took much, much longer. I had my first panic attack within 24 hours of returning from hospital and suffered with anxiety – at times, greatly. At one point I felt like I was on the edge of some kind of mental breakdown. Thankfully, it didn’t come to that, but I struggled with insomnia and panic attacks that would wake me from sleep and which sometimes continued all night long.

Physical and/or mental health issues meant repeated trips to hospital in June, September and November 2014. Ambulances were called a few times for out-of-control panic attacks. Cardiac rehab provided a boost to all-round well-being and offered an introduction to CBT counselling to help manage the anxiety. It helped. A lot. As did taking up regular moderate exercise, including a follow-on from cardiac rehab – a council-run cardiac circuit training class.

A friendly GP recommended Iyengar yoga. Upon meeting a very wise yoga teacher who got the whole picture straight away, I was told that I needed to “regain my sense of perspective” – these turned out to be very wise words indeed. Yoga, mindfulness and CBT all helped me start to live in the ‘here and now’ rather that worry about the past or the future. (It must however be said that while living in the ‘here and now’ makes great sense, it is much easier said than done!)

General talking therapy helped me to make sense of everything. But it took time. As the months passed the rollercoaster ride that was my ‘life post SCAD’ started to slow down… the bumps in the road came along less frequently and the time it took to recover from these bumps decreased. There were still setbacks, but the journey continued in the right direction.

My supportive cardiologist – although not knowledgeable about SCAD – showed great interest in my case and provided practical and moral support. Access to the Leicester Research programme provided a fuller diagnosis and a game plan for how to manage the condition going forward.

Most importantly, it reignited hope! One suggestion – having a mirena coil – once carried out, appeared to help iron out extreme hormonal fluctuations that had probably been at the root of most of my physical and mental health issues since the SCAD.

On my second ‘SCADiversary’, I felt happy, grateful and full of hope. I was finally daring to think about the future again and realised that there was much good work to be done still in my life and much fun still to be had. So, I appeared to have arrived at my ‘new normal’… It had only taken two years!

When Dr David Adlam’s first research fellow, Dr Abi Al-Hussaini, returned to London to take up a cardiology consultant position I transferred my care to her and have benefited from her wise and hugely empathetic oversight ever since. ‘Careful, watchful, waiting’ translates to occasional scans and annual check-ups to make sure there is no progression in my FMD. Navigating menopause has been made so much easier by her holistic approach to my care.

I started volunteering for Beat SCAD, helping to organise their conference in November 2016 and in 2018 I was honoured to be invited to become a Trustee.

I am an also admin on the ‘UK and Ireland SCAD Survivors’ page trying to pass on the support I received in my early days to those who follow on behind me. I regularly give talks about SCAD to help raise awareness – particularly to the maternity and paramedic sectors, attend conferences and exhibitions, organise events, and write copy for the Beat SCAD website, external publications and apps.

I’ve had no further SCAD scares and, while I don’t have to pace myself the way I did in my first two years after SCAD, there are still the occasional times when my body lets me know that I need to stop, rest and reassess my priorities. My biggest health scare was in December 2018 when I woke up one morning with stroke symptoms, after going to bed with a migraine the night before. It was scary but paramedics took my history and symptoms seriously and I was transferred to a stroke centre for assessment. After a brain scan it turned out I’d had my first (and hopefully only) hemiplegic migraine – a migraine that mimics stroke symptoms.

As a migraine sufferer since my early 30s I was fascinated when research funded by Beat SCAD donations showed a link between SCAD, FMD and migraine via the PHACTR1 gene.

The challenge for 2020 has undoubtedly been managing Covid-19 – both in terms of supporting the SCAD community with this additional health concern, and for the impact it has had on my own family.

Inevitably, some projects got delayed and certain Beat SCAD traditions – real-world conferences and walks for example – had to be postponed.

But the future is looking bright, the number of research papers featuring SCAD is growing rapidly year on year. Beat SCAD funding means that SCAD research has been able to continue. And we are tantalisingly close to rolling out our Buddy programme where trained volunteers, ‘experts by experience’, will offer one-to-one support for more recently diagnosed SCAD survivors. Onwards! 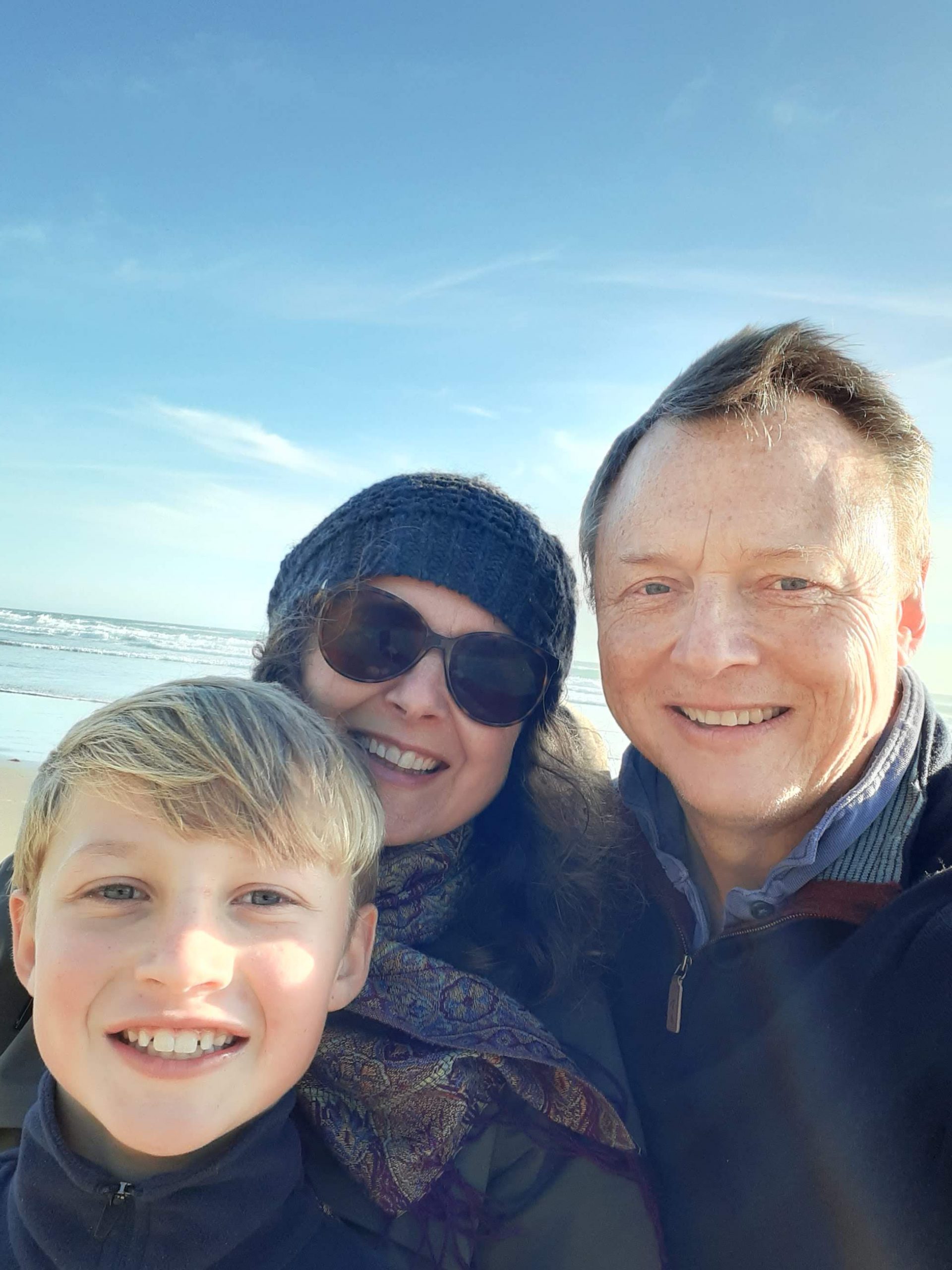 My top suggestions for SCAD patients