One Community cyclists raise more than £21K for Beat SCAD 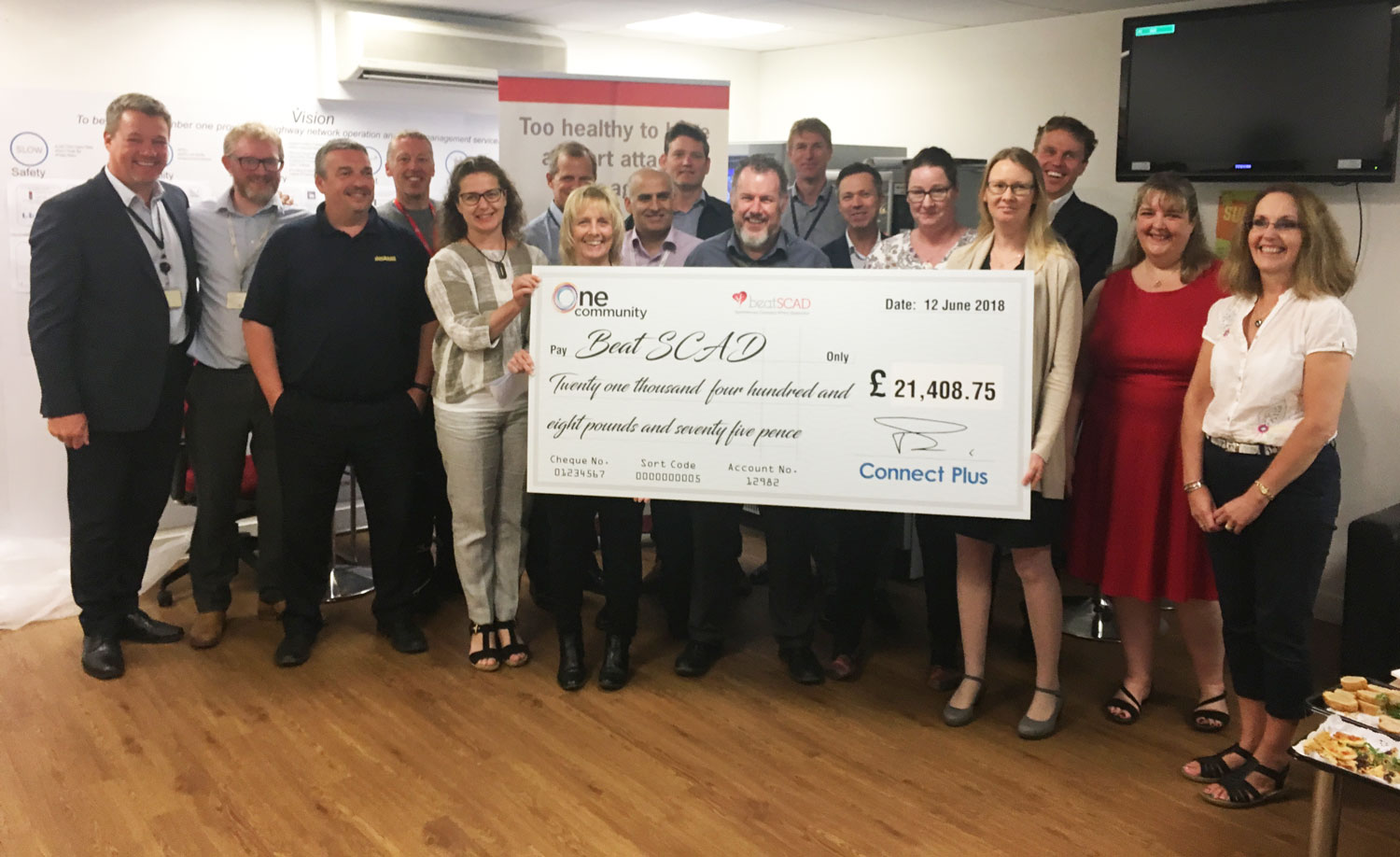 A team of 30 cyclists and their support team have raised a fantastic £21,408.75 for Beat SCAD during a very challenging cycle ride from Barcelona to Beziers.

The One Community group encompasses companies from across the M25 community, including Connect Plus, Connect Plus Services, Highways England, Equitix, Osborne, Jackson Framworks Ltd, Aconex, R&W, Aggregate Industries, DGA, Atkins, AECOM and Vines Group. Their annual cycle ride takes different routes each year and raises money for charities and this year Beat SCAD was honoured to be chosen.

Beat SCAD is a cause very close to one team member’s heart. John Worsfold, who drove one of the support vehicles during the three-day challenge, has seen his wife, Danielle, suffer two SCADs.

The 289-mile route across the Pyrenees Mountains was the longest and hardest route the cyclists have attempted. Cyclists climbed 18,152 feet, including a marathon 10,203 feet on day 1. The first support van covered 2,369 miles at an average 41mph and the second support van did 2,130 miles – and used eight tanks of fuel!

Beat SCAD Trustees Rebecca Breslin, Karen Rockell, Sarah Coombes and Debbie Oliver, together with volunteer Jacqui Hughes and Danielle Worsfold, were invited to Connect Plus’ headquarters in South Mimms on 12 June to be presented with a cheque for the funds raised. 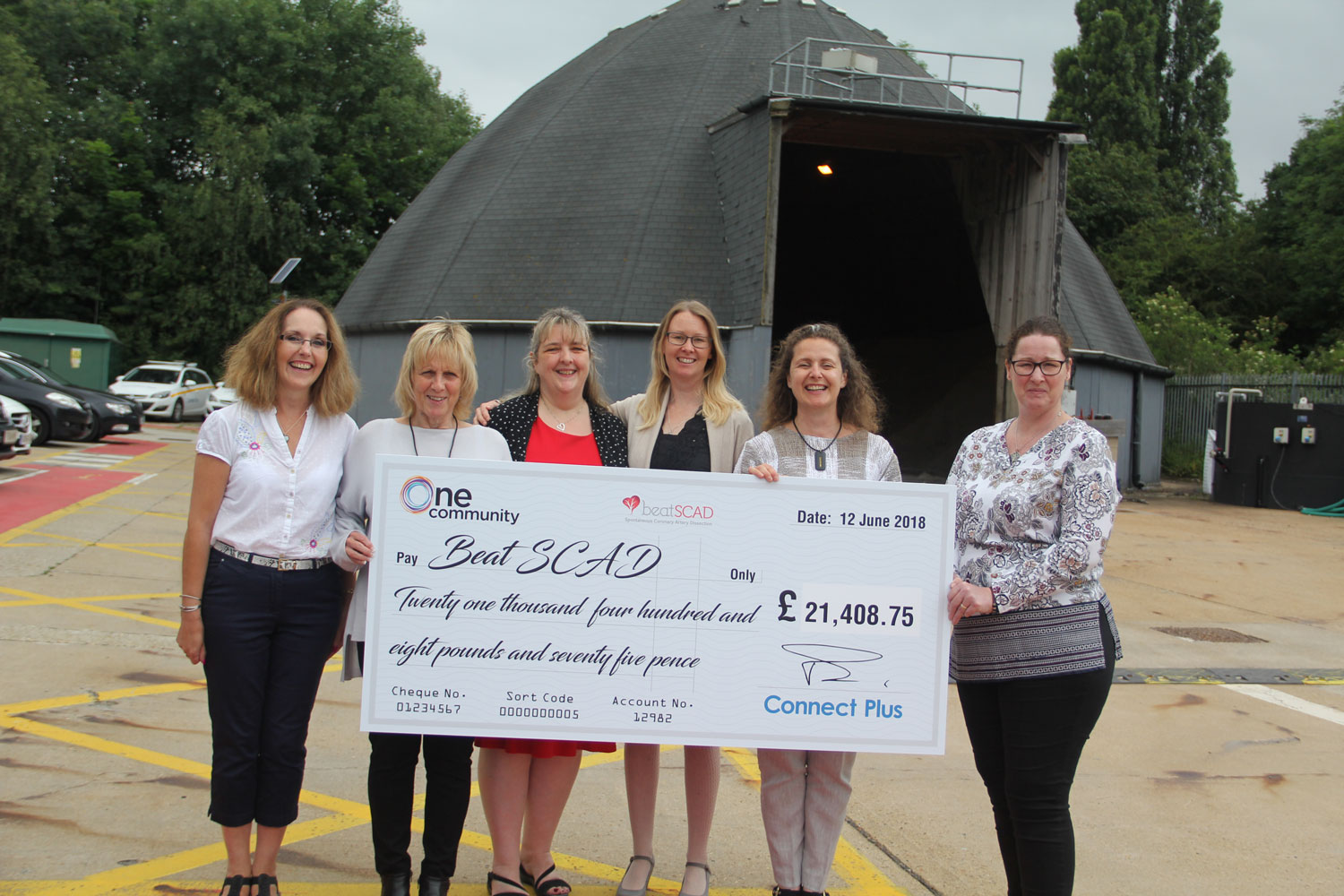 We were treated to a great video showing footage from the ride – those hills were very steep! We also met some of the cyclists and heard stories from the trip, including tales of frozen fingers, broken rules and sore muscles!

In thanking everyone who took part, we were able to tell them that their fundraising has made a massive difference and enabled Beat SCAD to double our planned donation of £25,000 to the research project at Leicester University/Glenfield Hospital, to £50,000!

Rebecca said: “We are blown away by this incredible fundraising team. It was a privilege to have the opportunity to meet members of the One Community group, hear about their experience and thank them in person. Watching their video gave an even greater appreciation of what they went through during this amazing achievement. I cannot thank John and Danielle enough for bringing this opportunity to Beat SCAD. The charity absolutely relies on SCAD community members to support our work and this opportunity enabled us to double our latest research donation which means research fellow, Dr Alice Wood (Cardiovascular Research Centre at Glenfield Hospital, Leicester), can continue her important work looking into some of the subgroups, including recurrent SCAD cases like Danielle.”

Jamie Wood from Connect Plus, said: “Raising money for Beat SCAD has been rather special – particularly when we found out that we’ve doubled their fundraising for the year. From speaking to the Beat SCAD volunteers, it is clearly a charity with so much passion, drive and personality. It sounds as though much progress has been made towards increasing the research, awareness and support for SCAD in recent years – long may that continue. It makes all the miles on the bike worthwhile!”