I had a SCAD in November 2010. I had been through a traumatic time during the nine months leading up to my event. In March 2010 having been diagnosed with liver cancer I was accepted for a liver transplant. While waiting for this life-saving operation, I underwent chemotherapy to try to keep the cancer under control, I lost weight and my hair fell out.

From April to September there were eight calls requiring a 140-mile dash by blue light paramedic car to King’s College Hospital, London, only to find the transplant could not go ahead for various reasons. Each time there was a long slow trip home, something to eat, catch up on some sleep and then try to regroup to wait anxiously for the next call. It was a very challenging time for me, my wonderful husband Clive and my family.

Finally, the ninth call came, the transplant went ahead and I received my life-saving transplant. To my delight and relief, I made a swift recovery and was back home in 12 days.

I remember feeling so blessed, and grateful to my donor, his family and the extensive transplant team that gave me this second chance of life. I was so relieved to think all that drama was behind me – little did I know!

Four weeks later, I was feeling good having gradually built up my strength. Wishing to get back to some sort of normal, I signed up for a felt making workshop at the local community centre. On the Saturday morning my husband dropped me off at 9am as I still wasn’t driving.

We watched a demonstration of what we were going to be doing, but I was getting distracted by what I thought was heart burn. It built up over the next hour along with a pain in my shoulder blade. When we stopped for a coffee break, I ate a sandwich hoping that would sort it out. The ‘heart burn’ significantly increased and I began to sweat and feel nauseous. I went to the Ladies, threw up and started to feel very unwell. I called my husband, he came and collected me, and we were home in two minutes.

As we walked into the house I suddenly felt as if a vice was clamped round my jaw and it was tightening. I began to get scared. The pain worsened and I felt like my neck was being squeezed too and I knew something was horribly wrong. A great sense of doom overwhelmed my and then I couldn’t breathe. Dropping to the floor, I couldn’t speak and felt disorientated.

We lived 30 miles from the nearest A&E hospital, but just round the corner was a community hospital, so Clive bundled me into the car and took me there. The on-duty nurse gave me aspirin and pain killers, did an ECG which was normal, and then everything stopped. I felt shaken and unwell but didn’t have pain any more. It was decided I should go to hospital anyway, given my recent history, and an ambulance was called to take me to A&E.

I was in A&E without seeing a doctor for hours. They did blood tests and kept me in overnight. The next day a cardiologist came to see me. Having had discussions with my transplant team, who assured him my heart was “extremely good”. It was felt that I might have had a blood clot which had resolved itself. However, to make sure the cardiologist wanted to keep me in another night and undertake an angiogram the next day. No mention of troponin at this point.

First thing Monday morning I had an angiogram, they found nothing except a slight narrowing in my LAD which they felt wasn’t significant or concerning. They prescribed me some aspirin and sent me home. “Unknown cause of chest pain not heart related” was written on my discharge sheet.

On the following Tuesday night I woke at 2am with heart burn again. Within minutes I was sweating, had severe pain in my shoulder and neck, then wham, an elephant sat on my chest and I couldn’t breathe. I managed to wake my husband who, seeing my distress, rang 999.

They did an ECG in the ambulance outside the house and then suddenly a sense of urgency increased and I was blue lighted to the cardiac unit. Doctors were gowned up and waiting in the corridor when I arrived and I was rushed in for another angiogram.

Having been given morphine and aspirin in the ambulance, I was feeling OK and wondering what all the fuss was about in a out-of-body sort of way. Up on the screen were two pictures. It was explained to me that the one on the left was my first angiogram and the other on the right was now. Even I could see the difference between my artery from one to the other. The on-duty cardiologist was on the phone to someone and another was explaining to me that they had no idea what was happening.

The room seemed to be full of people. They couldn’t understand how there could be such a difference in the two pictures. They clearly didn’t know what to do. Morphine bliss and sedatives took over at this point, but I vaguely gathered they had decided to try a stent. They were explaining but it wasn’t really sinking in. Thankfully it was successful.

I was kept in the IT cardiac unit for a few days while my transplant team and the cardiologists discussed my case. On day four I began having severe chest pain again and they whipped me in for another angiogram. My heart looked OK. Knowing what I know now this makes my tummy somersault, luckily I was ignorant and very, very lucky that no harm was done.

With a shrug of the shoulders I was sent home the following day with a huge bag of assorted medication and the words “We think you had a SCAD. You are unlucky, it is extremely rare, you will never meet anyone else with one, stop thinking about it and get on with your life.”

Famous last words! (Every now and then I email to tell them the latest number of SCADs in our group!)

I was so mad to be dismissed that way. I was determined to find answers to my questions. I was deflated when I couldn’t find any information. I felt alone, unsupported and afraid for my future. I wasn’t going to take that lying down! 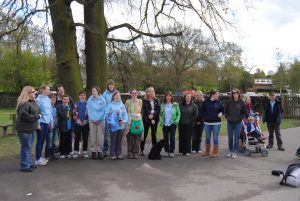 I have never stopped thinking about SCAD since. Not in a bad way, although it took a year for me to fully recover physically. It took two years to track down some other SCADs through social media. I cried on my drive home after meeting other SCAD patients in person at a walk organised by Rebecca Breslin (Chair of Beat SCAD).

It was inspiring to join a few UK SCAD survivors to campaign for research and attend meetings in Leicester with Dr Adlam. We enthusiastically took part in the first UK SCAD research study. It was an honour to create and launch Beat SCAD in 2015 with Rebecca and Debbie. Then in 2018 having Sarah Coombes and Harriet Mulvaney join us as trustees was an enormous boost.

Diagnosis has improved over the past decade – we know this because the number of people diagnosed with a SCAD is increasing year on year. However, treatment, support and post-SCAD care plans still have room for improvement.

I don’t want anyone else to feel the way I did back 2010, so I will keep working to support those affected by SCAD. It is an honour to be a Trustee and part of the Beat SCAD team, and for the foreseeable future my personal goal is to help Beat SCAD achieve its mission. 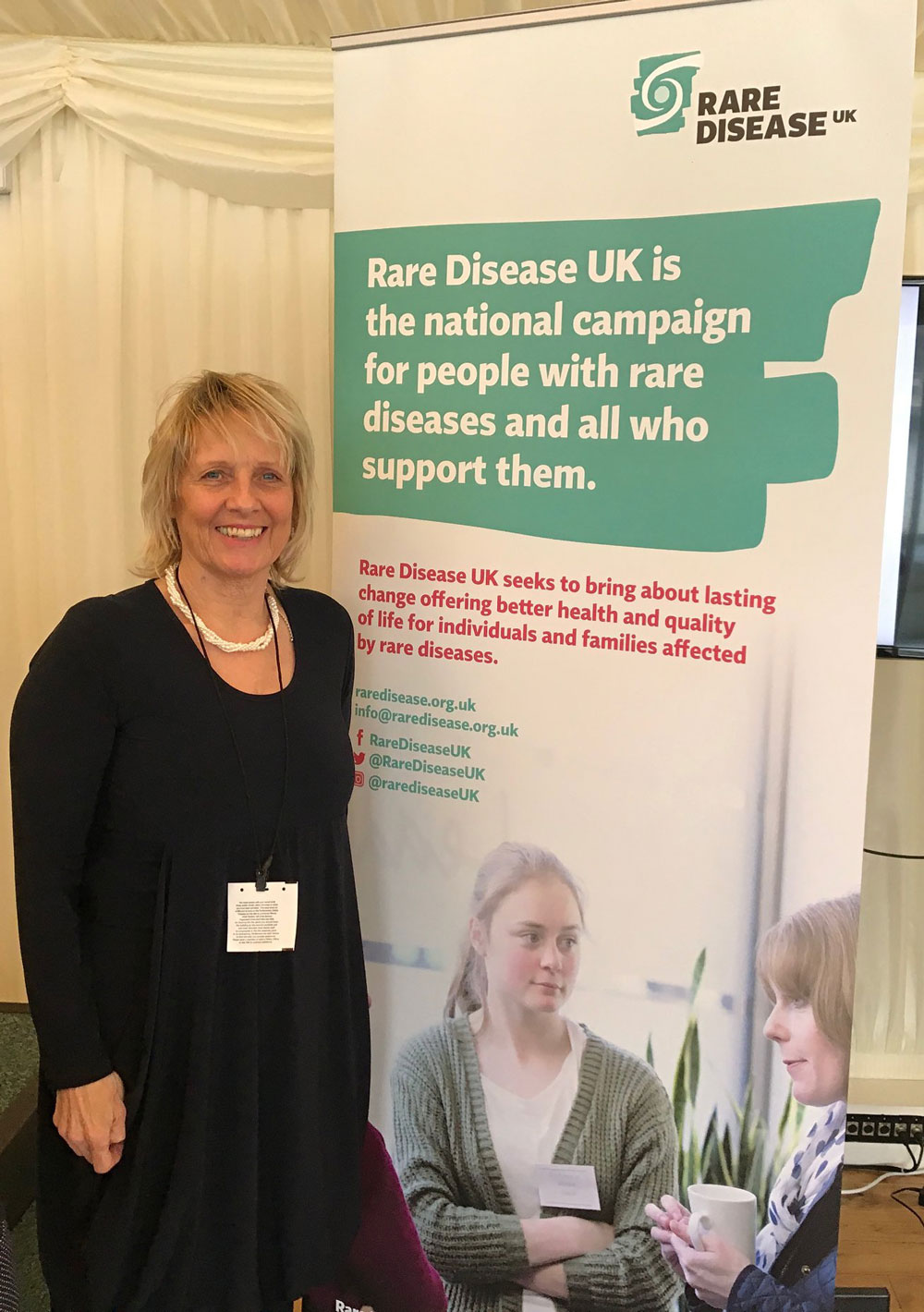 I was so mad to be dismissed that way. I was determined to find answers to my questions. I was deflated when I couldn’t find any information. I felt alone, unsupported and afraid for my future. I wasn’t going to take that lying down! 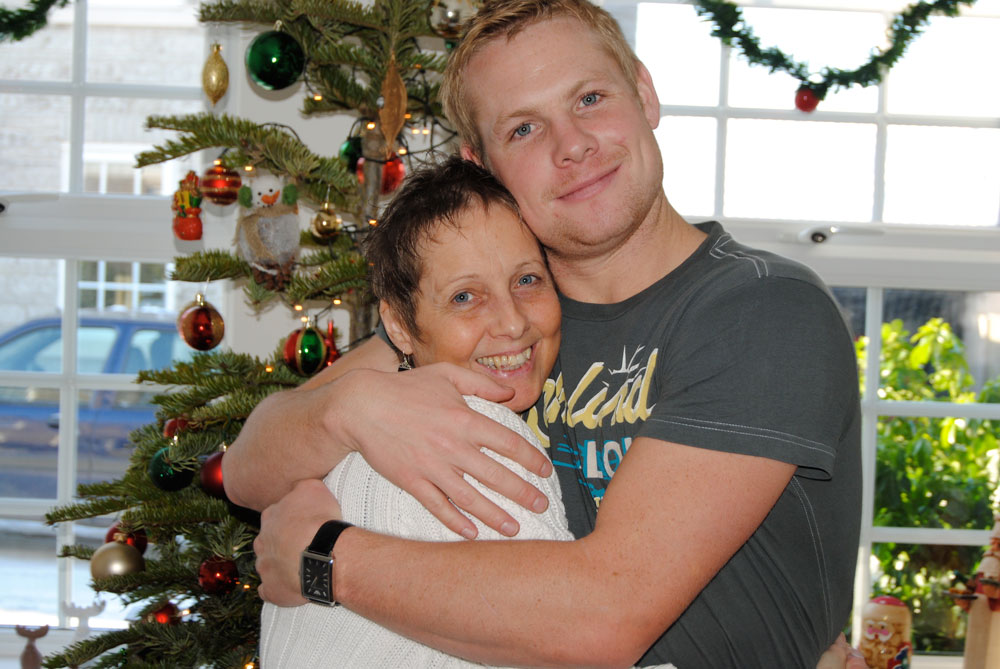 My son, Callum, was flying home from New Zealand to see me after my transplant. He was mid-air when I had my SCAD! This photo was taken the day he left to go back to New Zealand a month later.