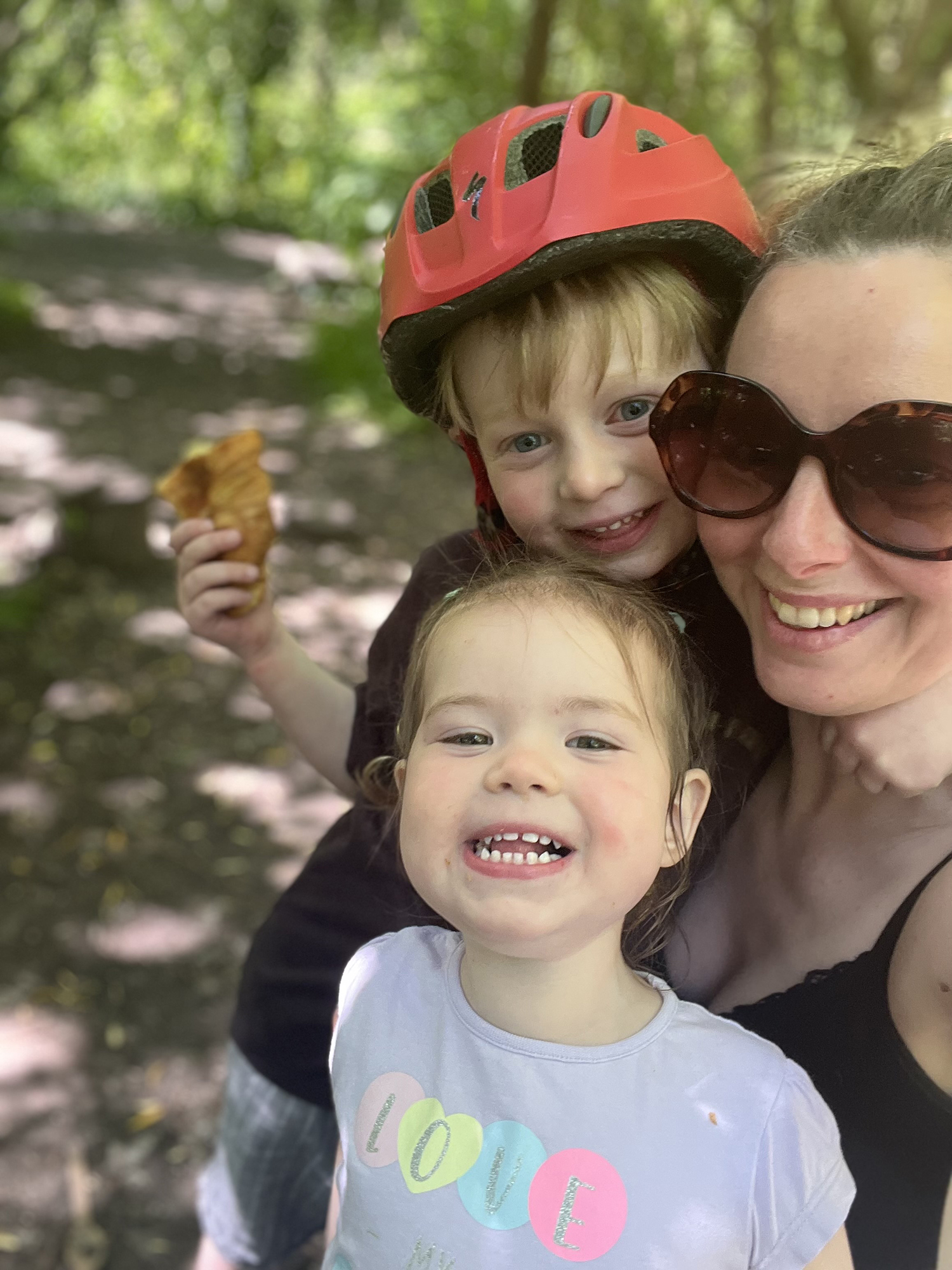 When Jenny first went into hospital with severe back pain, little did she know that she was about to experience a life-changing medical event. What followed, about a month later when she was readmitted, would be filmed for the Channel 4 programme 24 hours in A&E broadcast on Monday 1 August 2022 (Series 27 episode 4).

While Jenny, aged 34, was sitting in the A&E majors room, the doctor kept focusing on her heart and ECG results. “Are you sure it’s not my back?” she asked on more than one occasion, but still no one seemed to want to check her back over. They just did more ECGs and sent her off for a chest x-ray.

The A&E doctor was stumped. Jenny was a bit of an anomaly; the doctor couldn’t quite work out what had happened. She said she would call for a cardiologist to take a look.

“I think you’ve had a heart attack”

He arrived and was very quiet and calm, performing an echocardiogram scan on Jenny’s chest. As he worked he gave nothing away. Then he spoke: “OK, so I think you have had a heart attack.” He suggested it might be linked to having recently had a baby – Jenny’s daughter was four and half months old – or perhaps some kind of emotional trauma. He was leaning towards the post-partum theory, but all of this would need checking. Jenny was given a CT scan and then taken to the cardiac care unit.

Jenny felt very shocked and confused… She was also concerned about her very young children: her son who would not understand why she was not at home and her exclusively breastfed daughter. It was September 2020 and Covid was making it difficult to do anything. Pandemics really weren’t the best time to have a medical emergency…

As she lay in the cardiac care unit, time began to slow down. Jenny waited for the angiogram and waited and waited. Other patients came in and went before her. They were actively having their heart attacks and hers was already in the past.

Getting a diagnosis while concerned for a hungry baby

A very pressing concern was for her daughter, who was hungry. Jenny was desperate to feed her daughter, and to hold her close and comfort her. The nurses wanted to help but were restricted by Covid rules.

Eventually the nurse in charge decided something needed to be done. She had a pump brought over from Maternity and Jenny was able to express some milk. A plan was made; Jenny would pump and someone would collect. If the baby fed they would continue in this way, but if not they would allow the baby to come in. And so Jenny pumped and soon it was finally her turn for an angiogram.

The cardiologist explained to Jenny what they believed was going on – a SCAD that had caused one of the coronary arteries to become blocked and so given her a heart attack.

They went in through an artery in Jenny’s arm with their camera to see what they could discover. The process took ages.

Eventually the doctor spoke. “Well, it was a big tear, and the artery was completely closed but the good news is we have opened it with a balloon.”

Back on the ward the nurses agreed that Jenny’s partner could bring the baby to her. Feeding her baby was settling for everyone. There was relief in her partner’s face but, once the feeding was complete, he took the baby back and then broke down. Jenny tried to reassure him. “It’s OK, I am OK now, I am not going anywhere.” He reply was, “You can’t.”

With hindsight Jenny thinks it was a combination of shock and complete ignorance that kept her going. She knew she’d had a heart attack, but it was in the past now and she was alive. The doctors told her about medications she needed to take to help her heart recover and the goal became weaning her daughter so that Jenny could take the best medicines available.

The doctor visited her one morning after an MRI scan and explained that, although her heart function had already improved, 24% ejection fraction up to 33%, she now had a clot in her left ventricle.

Jenny felt gutted and started to think about the implications for her health and her family. She realised she would need to wean her baby immediately to be able to start the medicines she needed as soon as possible.

After discussing this with her partner, it was decided he would take the baby home and she would miss two maternal feeds, and this would increase by a feed each day until the baby was weaned.

That night Jenny really did cry. She cried with her partner and it all came out. She started to appreciate just how serious her situation was – that you don’t carry on with life as before after a heart attack as serious as hers. The couple started creating plans to support her recovery.

Jenny also started a list of questions for her doctor. Top of the list was “Am I going to die?” Her doctor was very reassuring. He explained that her dying was not something he expected. He encouraged her to stay as positive as possible as it would help with her healing. He also organised for the heart failure nurse to visit to discuss things a bit more, particularly about what going home would be like.

The heart failure nurse brought a little red book all about living with heart failure. Jenny began to learn that the events of the last week would have a lasting impact on her and potentially shorten her life a little. She learned that she was now considered to have heart failure, would need medication for the rest of her life and there were potential symptoms she would be living with.

After a few days of reading, Jenny was beginning to accept her new reality. She used the support of family and friends to keep positive and as she learned more, she accumulated a new list of questions.

Jenny and her partner were also beginning to have some success with their daughter. She was drinking formula. Not enough but it was a start. They talked about their lives and the things they were grateful for. And the changes they would make to ensure that they made the most of what they had.

Ending breastfeeding was hard, but Jenny felt she had no choice. Her children needed their mother, and she needed the medication. She was in hospital for another five days after her partner took their daughter home for the final time. Covid restrictions meant that all contact after that was via video call.

Before she went home, Jenny met with another cardiac nurse. He answered many of her questions and left her feeling more prepared for the journey ahead.

When Jenny got home

Once home, Jenny had no other option than to dive straight back into motherhood. Her children were small and in desperate need of their mother. She relied heavily on the support of her partner and family as physically she was not yet up to the task, but she was determined to be the best mum she could.

Days remained painful and this left Jenny tired and anxious, but she tried to keep this as hidden as possible; she wanted desperately to be a ‘well mother’ for her children and her partner was still dealing with his own anxieties.

However, repeated chest pain did bring Jenny back to hospital a month later, fearing that she was having another heart attack. While waiting to be seen she was asked by the 24 hours in A&E film crew if she would be willing to be filmed for their programme. Wanting to raise awareness of SCAD, this often missed and mis-diagnosed condition, she agreed.

The past two years

Beat SCAD asked Jenny to update us about her life after SCAD in the nearly two years since her diagnosis. She told us “I am amazed that it is nearly two years since I had my SCAD. I struggle to have a day where I do not think about what I have been through and my health. There are too many regular reminders; a niggle in my chest, another bruise due to warfarin, a delicious treat I avoid in the interests of staying healthy, and of course my daily consumption of medication.

“However, time has healed me. My heart failure is no longer severe and I am not consumed by anxiety. I am able to enjoy my family and keep up with them most of the time! I have also been able to return part time to a job I love.

“I hope I have minimalised any impact of my health on my children, though I know it has been hard on my partner. He struggles to shake the worry and finds it difficult to trust me when I tell him I am OK. But time can only make this easier for him too.

“This experience, though awful at the time, has made me value my life far more than I ever did before. I no longer feel indestructible and like ‘it will never happen to me’, but I do appreciate what I have so much more.

“On occasion, I worry it could happen again, or that my health will decline due to heart failure, but I talk to those around me and seek reassurance from my cardiologists.

“We don’t know what will happen tomorrow, next week or in the years to come, so I try my hardest to enjoy today and leave the worries of tomorrow till tomorrow.”

Beat SCAD is incredibly grateful to Jenny and her family for agreeing to the filming and helping us to raise awareness of Spontaneous Coronary Artery Dissection among the general public and healthcare professionals alike.