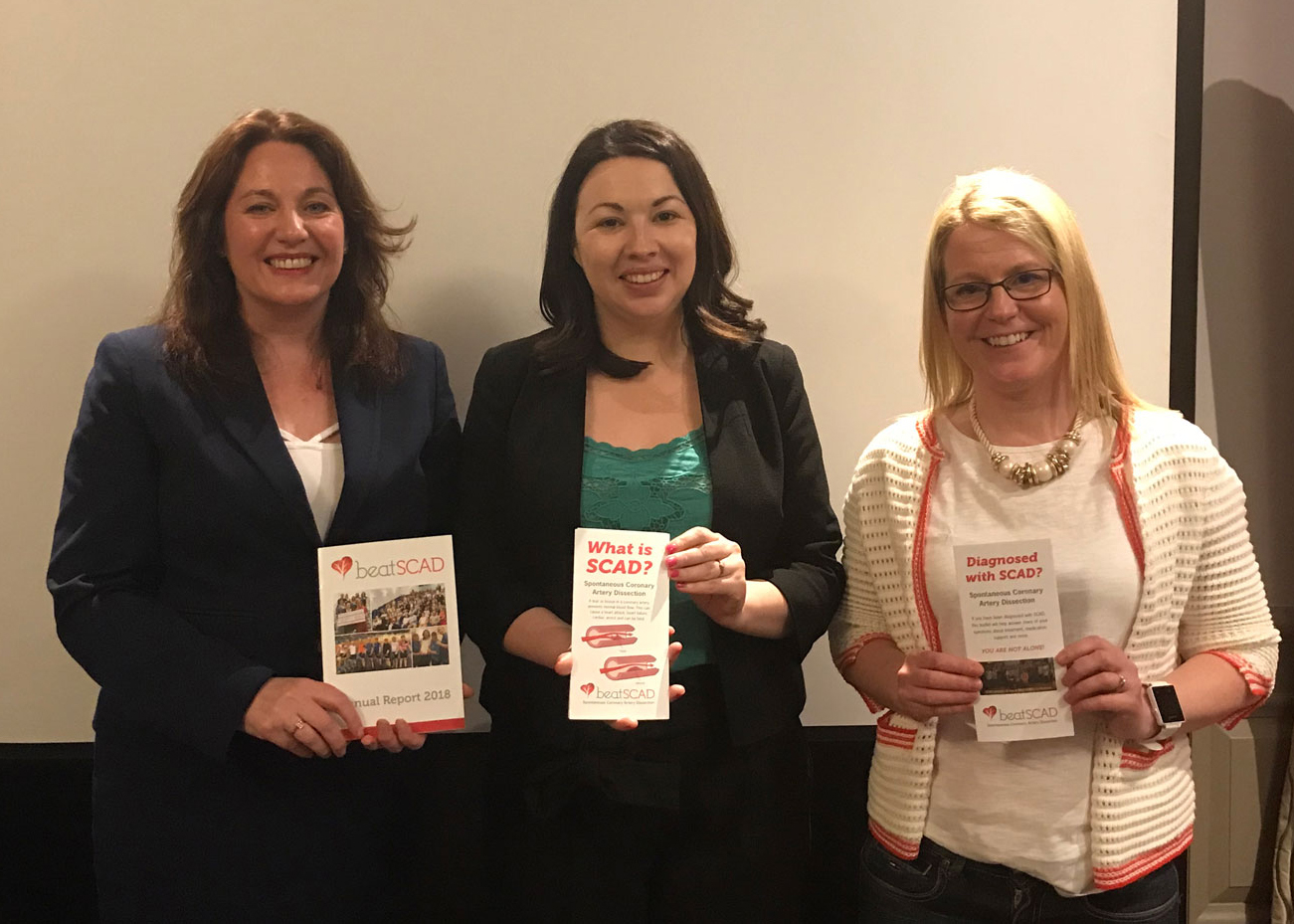 SCAD survivors Margaret Davis and Róisín Falconer attended a British Heart Foundation (BHF) conference in Edinburgh on 29 May, where an expert panel aimed to address how heart disease affects women in Scotland, and the inequalities they can experience in diagnosis and care.

According to the BHF, heart attacks kill more Scottish women than breast cancer, but women with heart and circulatory diseases are often diagnosed later than men and have worse outcomes.

The first speaker was Professor Colin Berry, Professor of Cardiology and Imaging at the University of Glasgow, who outlined the key issues. When he asked for questions, Margaret and Róisín spoke about the issues SCAD patients in Scotland have, including difficulties getting referred to the two UK’s SCAD NHS Clinics in Leicester and London. Margaret shared her story and said that she felt that she had been lucky that her SCAD and MI had happened while on holiday in England, as this had led to immediate contact with and quick referral to the team at Leicester.

Professor Berry, who knows about SCAD and cares for some SCAD patients, responded, reinforcing the issues raised and the problems in getting care. The team from Chest Heart & Stroke Scotland (CHSS), who aware of the issues facing SCAD Survivors through discussions with Beat SCAD, supported Margaret’s comments and agreed that more needs to be done in terms of the supply of appropriate Cardiac Rehab.

Scottish patients would like a SCAD clinic established in Scotland to care for Scottish patients. As one has already been set up in Dublin, Margaret asked if, as a Scottish citizen, she would have to apply for an Irish passport to get treatment, as some patients are unable to get referrals to Leicester or London, due to cross-border funding issues.

Monica Lennon, Member of the Scottish Parliament for the Central Scotland, responding on behalf of the other MSPs, said all parties would take this issue forward. Margaret received an email from Monica two days after the Conference confirming the Parliamentary questions she has raised to progress the issues.

The next speaker, Anna Marie Choy from Ninewells Hospital in Dundee, focused on heart issues and pregnancy. Róisín’s SCAD happened after the birth of her third child in 2013. She was told by paramedics she was having a panic attack, then, when they finally did an ECG, they realised she was having a heart attack. She was a slim, healthy 38-year-old with none of the traditional risk factors for heart disease. The doctors who had initially treated her didn’t find the SCAD and told her she was just unlucky and it wouldn’t happen again… but it did. She finally got a SCAD diagnosis, but it was only when she was able to speak to a SCAD expert in Leicester that she started to understand what had happened to her and move on with her life.

“It was like a weight being lifted off my shoulders, to finally talk to an expert, and just the acknowledgement that my symptoms were real, I think was probably a turning point for me. I could get on with my life,” she said.

Margaret said: “You could have heard a pin drop when Róisín was speaking. She got through it fine – I was in tears.”

In the audience were cardiac nurses who work with gynaecology teams, and one of them has followed up with Róisín and is committed to taking this forward.

A massive thanks to Róisín and Margaret for raising awareness not just of SCAD but of the issues Scottish patients have in terms of being referred and getting appropriate treatment. We look forward to hearing about all the follow-up actions from the speakers and audience members.