April 13 2017,  aged 35, a wonderful sunny spring day in London when we welcomed our second child, Wills into the world – a much calmer arrival compared to his sister’s three years previously! He was perfect, and aside from the exhaustion of the early days, life didn’t get any better than this.

Fast forward 8 weeks and I’d made a seemingly great recovery, but as I was running around the park with both children in a double buggy during a buggy fit class, I started to think I must have lost my fitness; either that or I had pushed myself to exercise too soon after birth because I was experiencing a slightly dull ache in the centre of my chest whenever I exerted myself. I foolishly batted it away until it was more convenient to explore. When my husband was home from work a week or so later I took myself to A&E (for expediency if nothing else) who couldn’t find anything wrong. I was quietly comforted and convinced I’d just pulled a muscle in my chest due to lugging two children around.

Another two weeks passed and the heat wave really started to affect me. Walking up to nursery pushing the pushchair the exertional chest ache seemed to ramp up a gear. I decided to ring the doctor that day and book an appointment for later in the week and this time ask for a private referral, again for expediency, I just wanted to get to the bottom of whatever it was quickly. I didn’t have time for this!

Another 10 days later I was in a private cardiologists room explaining my symptoms in a rather blasé way, making light of the situation as I really felt very well in myself. It was only when I was told that I needed to go for an urgent CT scan immediately that I started to wonder if there really was something seriously wrong. Something wasn’t adding up – I was a “slim, fit, young woman” ( my caridologists words!) yet I had angina symptoms associated with someone twice my age and size. Thank God for my wonderful cardiologist for acting so quickly. I repeatedly think back to that day and contemplate the ‘what ifs’ – they make me shudder.

I went straight for the CT scan alone, still underplaying it all,  convinced that as I had been seen privately they were just taking the ‘belt and braces’ approach – how wrong I was. The CT scan in itself was a pretty frightening experience and like nothing I’d ever experienced before having always had a good bill of health. I waited for the radiologist to come and tell me that everything was fine, that I was an enigma, and to confirm my original diagnosis of a pulled chest muscle. But the look on his face told me something entirely different.

There was in fact a tear in my mid right coronary artery – a major artery running into my heart – caused, he said, by pregnancy hormones. It felt like a classic movie moment when everything stops around you, you can see mouths opening and closing but the words were simply not penetrating. I felt hot all over, and had the most deafening high-pitched ringing in my ears. I was desperately trying not to panic or cry, but in the end it got the better of me. In that moment I felt like a tiny child, utterly lost and alone in this clinical corridor. I cried then, not for me, but for my children, my tiny baby who I’d left at home, my deliciously funny little three-year-old girl who was just beginning to make her mark on the world. Then I quickly felt absolutely furious, how dare this happen to me, why now?! I had an inner fight in me that almost made me want to grab the radiologist by his lapels. “I’ve got two tiny children at home that I have absolutely no intention of leaving. Please fix me. Quickly.” 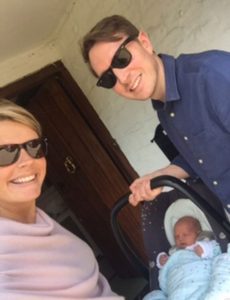 Victoria with her husband and baby

Bursting out of the hospital in a haze I called my husband at work. I don’t really recall much of the conversation, but I do remember screaming at him down the phone as he tried to ‘solutionise’. “Don’t try and tell me everything’s going to be all right – just be with me in this.” It was only on my way home in the car speaking to my cardiologist that I first heard the words SCAD, in my instance Post-partum SCAD – Spontaneous Coronary Artery Dissection. He wanted me to visit his colleague in the morning when they would come up with a plan – he was very reassuring that whilst my condition had been caught early, they needed to act fast.

24 hours later I was being prepped for theatre at Harefield Hospital, an angiogram procedure followed by immediate angioplasty. It all happened so quickly that I never really got time to feel fearful about the procedure itself, I just knew that I had to be fixed so that I could get back home to take care of the children. My adrenaline was in full flow. 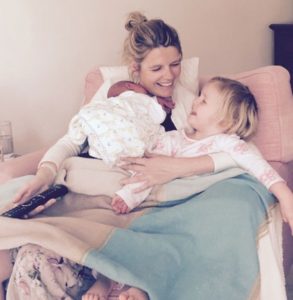 Victoria with her children

It was afterwards that the shock set in – the nights that followed didn’t bring sleep, instead they delivered red-hot fear, that would keep me awake listening to my pounding heart, and have me question if my heart had in fact been fixed; if it was working properly. When I did eventually fall asleep, I’d wake repeatedly from the same nightmare where I was watching my daughter crying in the garden whilst I laid on the grass nearby. That could have happened to me had I not persevered with my symptoms. Those early days were the darkest, most frightening of my life – and nobody could make it better.

Thankfully, time is, of course, a clichéd healer, and I keep being told that my case is ‘very rare’ and unlikely to happen again. But in my mind I question whether anyone knows enough about my condition to guarantee that it will never happen again? Yes I was lucky – I didn’t have a full heart attack, so there was no lasting damage to my heart; in fact the rest of my heart is in apparently ‘immaculate’ condition.

Unfortunately having been on the receiving end of such unlikely odds in the first instance, means the mind is far too powerful to ignore the fact that this may happen again. But until then, I choose to live. I have to. Life will never be the same again, I see everything differently, things that I used to hold with upmost importance suddenly don’t seem to matter. I’m ruthlessly uncompromising on making decisions that will only bring happiness, especially in the short term, rather than planning ahead. And it’s tough readjusting to the new me, not just for me, but for those around me.

One thing I’m certain of – if this illness chooses me again, I don’t want to have wasted time worrying about it. I’ve accepted I can’t control destiny, but I can control how much I LIVE in the meantime – and being with my wonderful family and friends is all that I ever need. In the end, it really is true that the only thing that matters is to love, and be loved. 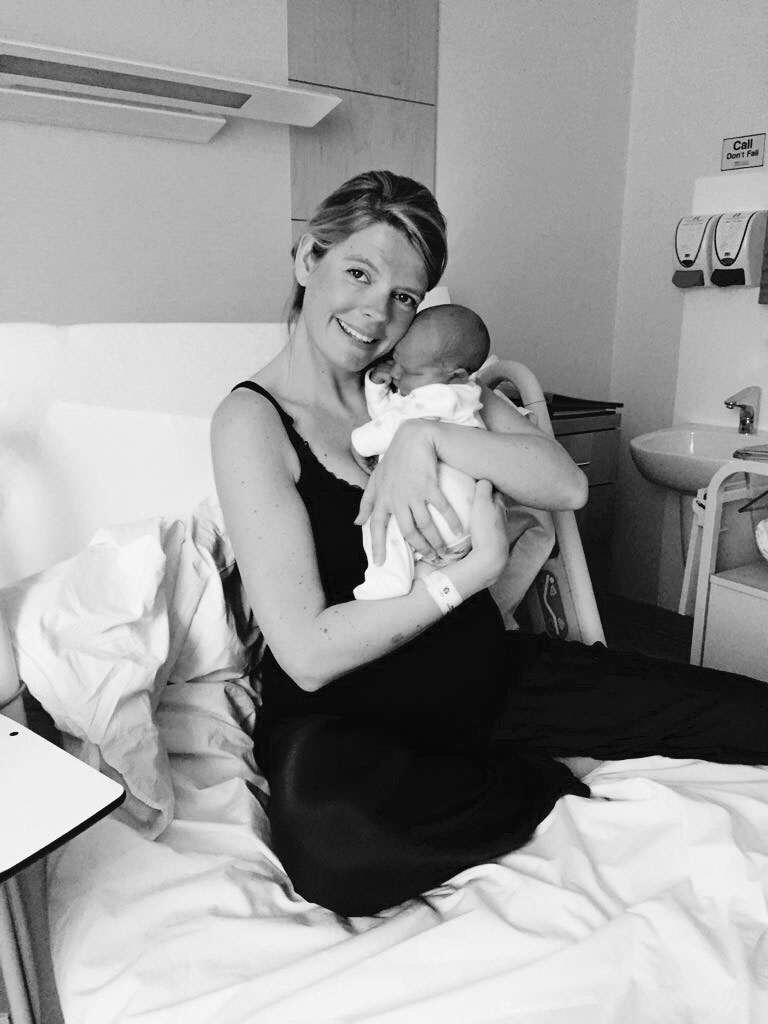 I felt like a tiny child, utterly lost and alone in this clinical corridor. I cried then, not for me, but for my children, my tiny baby who I’d left at home, my deliciously funny little three-year-old girl who was just beginning to make her mark on the world. Then I quickly felt absolutely furious, how dare this happen to me, why now?!