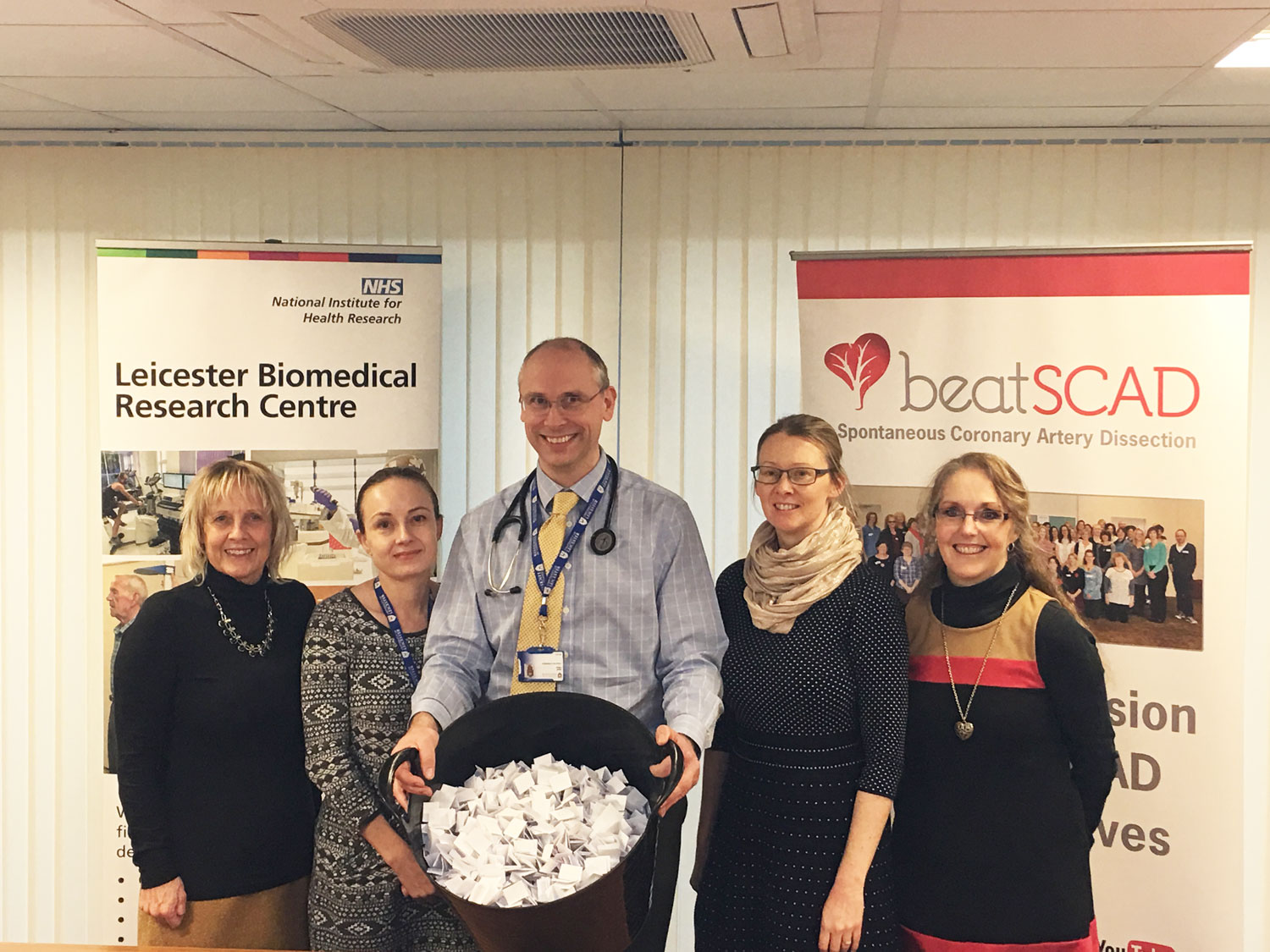 In January 2018, a donation of £3,000 was awarded following the Beat SCAD Prize Draw that ran between September and November 2017. These funds were used to purchase and distribute blood sample tubes to SCAD patients who were registered for the research but had not participated in any research assessments.

SCAD patients took the blood tubes to their GP or local hospital for samples to be taken and shipped to Leicester. Almost 400 patient samples plus a further 50 samples from relatives were returned, which was a fantastic return rate and was hugely appreciated by the research team.

Dr Adlam said: “The blood samples have led directly to the identification of the first genetic risk locus associated with SCAD. This should not be considered as an indication that SCAD is strongly inherited as the evidence suggests SCAD does not usually run in families, but it provides international research groups with the first opening into understanding how our genes affect the risk of SCAD.”

The publication of the first SCAD genetics paper in the prestigious Journal of the American College of Cardiology (JACC) is imminent and the funding support of Beat SCAD is acknowledged in the manuscript.

The blood samples are now undergoing gene sequencing and will soon provide a valuable dataset for the research team to investigate, including looking for known genes for connective tissue disorders.

The blood samples are also enabling important laboratory work to be conducted which aims to investigate some of the underlying ‘why’ questions about SCAD.

Samples from SCAD patients and healthy volunteers are being used for a proteomics study in which the structure and function of proteins are being analysed. The expression of proteins by cells and tissues can change in relation to disease so this study is looking for any patterns that may be linked to SCAD. 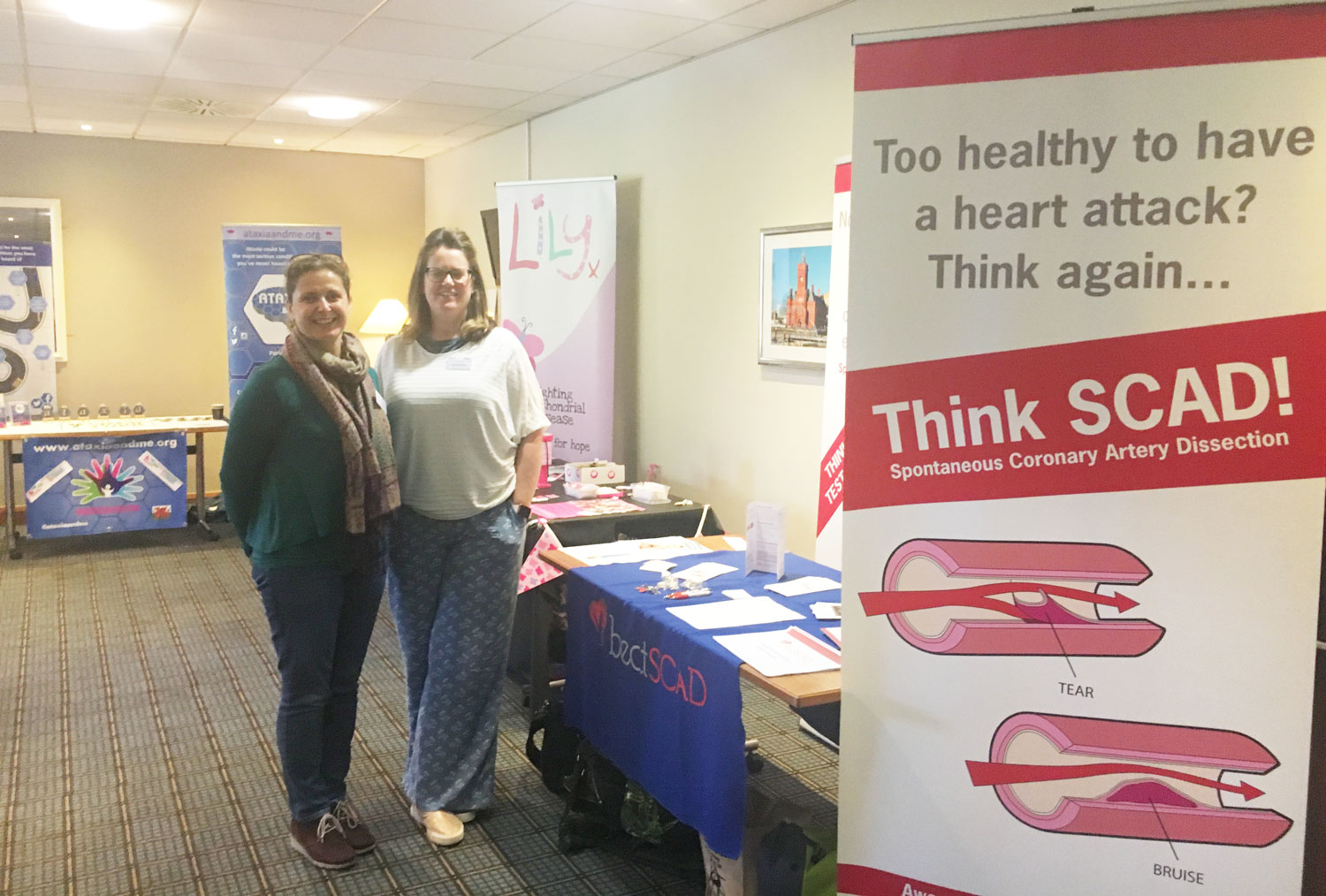 On Thursday 18 October, Beat SCAD Trustees Sarah Coombes and Harriet Mulvaney attended the Rare Disease Patients’ Network in Wales event in sunny Cardiff. This was the fourth such annual event and the first one Beat SCAD had attended.

The day was organised and hosted by Genetic Alliance UK (the national charity of 200 patient organisations supporting those affected by genetic conditions and the umbrella body for Rare Disease UK, the national campaign for people with rare diseases and all those who support them) and Wales Gene Park. It brought together many patients, all of whom had a rare disease, their carers and families, healthcare practitioners and other interested parties, to enable networking, sharing of stories, listening to updates on research projects and progress on the Welsh Implementation Plan for Rare Diseases.

The aims for Beat SCAD were to:

There was a steady of flow of visitors – patients and their families, healthcare practitioners, researchers, representatives from other charities and organisations. It was a fantastic feeling to be sharing our stories, the power of patient-led/inspired research and the amazing work that is going on in research programmes. We sensed a genuine interest in our condition.

There was also the opportunity to attend some of the organised speaking slots throughout the day. Hearing stories from those affected by a rare disease was very moving, and it was a real honour to talk to them when opportunities arose.

Whilst all our experiences were different, there were lots of issues and challenges that were shared: including: difficulty and/or delay in getting a diagnosis, limited information about the condition finding the right person to treat your condition, constantly self-advocating and retelling your story in order to get access to the right treatment, plus dealing with the challenges a rare disease throws at you in addition to ‘just life’.

Sarah was able to attend a session giving an update on the SIGNAL Project (Studying the Implementation of GeNomics in wALes) – click here to read her report.

Harriet heard an update from the Senior Policy Manager at the Welsh Government, responsible for progressing the Welsh Implementation Plan for Rare Diseases, Caroline Lewis. This is a five-year plan, first published in February 2015.

Of the 3.1 million people in Wales, they estimate 150,000 are living with a rare disease.  Reference was made to the large number of referrals and treatment outside of Wales but they were not able to provide detail at this event. By Caroline’s own admission, progress against this plan has been slow and the first year was spent identifying leads within each of the Welsh Health Boards, securing engagement with the plan being their first major hurdle. They then identified the plan ‘as was’ wasn’t deliverable so it was re-published in July 2017.  Their immediate priorities now are to:

In summary, some progress has been made in improving the care of people with rare diseases in Wales, but more still needs to be done. Continued exposure and the raising awareness of the Rare Disease Implementation Plan and the Implementation Group with senior management within health boards continues to bring positive returns, however there is ample room to build on this.

Click here to read more about the progress being made in Wales in the latest Annual Report (2017).

Yet again, the day provided numerous opportunities to reflect on the collective power of our individual stories.

At the Rare Disease Patients’ Network in Wales event in Cardiff on 18 October, Beat SCAD Trustee, Sarah Coombes attended a talk about the implementation of genomics in Wales.

Sarah and the other delegates were very keen to hear from Dr Ian Tully of the SIGNAL project (Studying the Implementation of GeNomics in wALes). This project piloted the use of diagnostic clinical exome sequencing (CES) in the NHS in Wales.

To a largely non-medical audience, Dr Tully compared the nucleus of a single cell in a human body to a library. The library bookshelves were the 23 pairs of chromosomes. An individual book was an individual gene.  A ‘letter sequence’ – ie a sentence in the book – was compared to a data sequence in a gene. The SIGNAL project aimed to find data sequence errors. So, to put this all in context… finding one error in one gene was like trying to find a spelling mistake in one book of an entire library!

We were told that genes make proteins and all body functions and processes are controlled by proteins.  A ‘spelling mistake’ in one gene will stop or alter a protein process. The study was looking at whether an alteration in a gene causes a disease or whether it is just part of human variation. The average person has 100,000 variations – most of which are harmless.

Dr Tully went on to explain that there are anything between 5,000 and 8,000 known rare disease. Having a rare disease is not uncommon however, individually, they are rare conditions. An astonishing 1 in 17 people in the UK has a rare disease. Three million people in total.

For many people with a rare condition, getting a diagnosis in the first place is the hardest part – with many patients experiencing a cycle of referral, testing, no diagnosis, disappointment, new referral and so on.

The SIGNAL study wanted to see what role exome sequencing could play in helping to diagnose rare disease, with the hope that transformational change would ultimately happen in NHS Wales, also with economics benefits in the long term.

The study recruited 167 patients to study – 44 family groups (child and two parents) and 29 singletons (no parents to test) with ‘unexplained delayed development’.  Results from family groups are more helpful – because it is understood that changes inherited from healthy parents are not likely to cause a child’s condition so can be ruled out.

When genome testing is done, results are graded from 1 to 5.  1 = confirmed ‘benign’, 2 = likely benign, 3 = uncertain significance, 4 = likely pathogenic, 5 = definitely pathogenic.  A result of 1 or 5 is the most desirable because they provide a clear answer.  An answer of  2, 3 or 4 requires interpretation.

In the SIGNAL study 27% of the family groups got a diagnosis grade of 5, 4 or a ‘high’ 3 – ‘with inheritance evidence resulting in a high suspicion’.  When these high grade 3s were taken out, the number of families with a grade 4 or 5 diagnosis was 16%.

“As a novice to genetics, this result was quite startling for me,” said Sarah.

As Dr Tully explained, they don’t always find the answer, even after a full sequencing has been done. But as more work of this nature is completed, doctors will get better at interpreting the results, new computer modelling will be developed. Key to future success is the need for global unified practice so that research findings can be shared and compared on a like for like basis. New discoveries are being made all the time.

More work needs to be done on discovering polygenic traits (ie conditions that are influenced by many genes) and also with the non-coding part of DNA (2% of DNA makes protein, 98% is non-coding but that does not mean it is also non-functional, but researchers still don’t know what that 98% does).

“All in all it was a fascinating insight into the role of genome sequencing to help diagnose rare diseases,” added Sarah. “I was sitting next to a lady with (in her own words) an ‘undiagnosed neurological condition’. Her health was deteriorating rapidly but no-one could tell her what condition was affecting her, so no-one could advise her on how to halt or even manage her heath. I left the talk thinking that SCAD patients are ‘fortunate’ in that it is at least possible to diagnose our condition after the event has taken place. Perhaps one day polygenic traits will be discovered to explain SCAD and allow for its early detection before a SCAD occurs? Wouldn’t that be wonderful?!”