David cycles more than 1,100 miles to raise awareness and funds for SCAD research 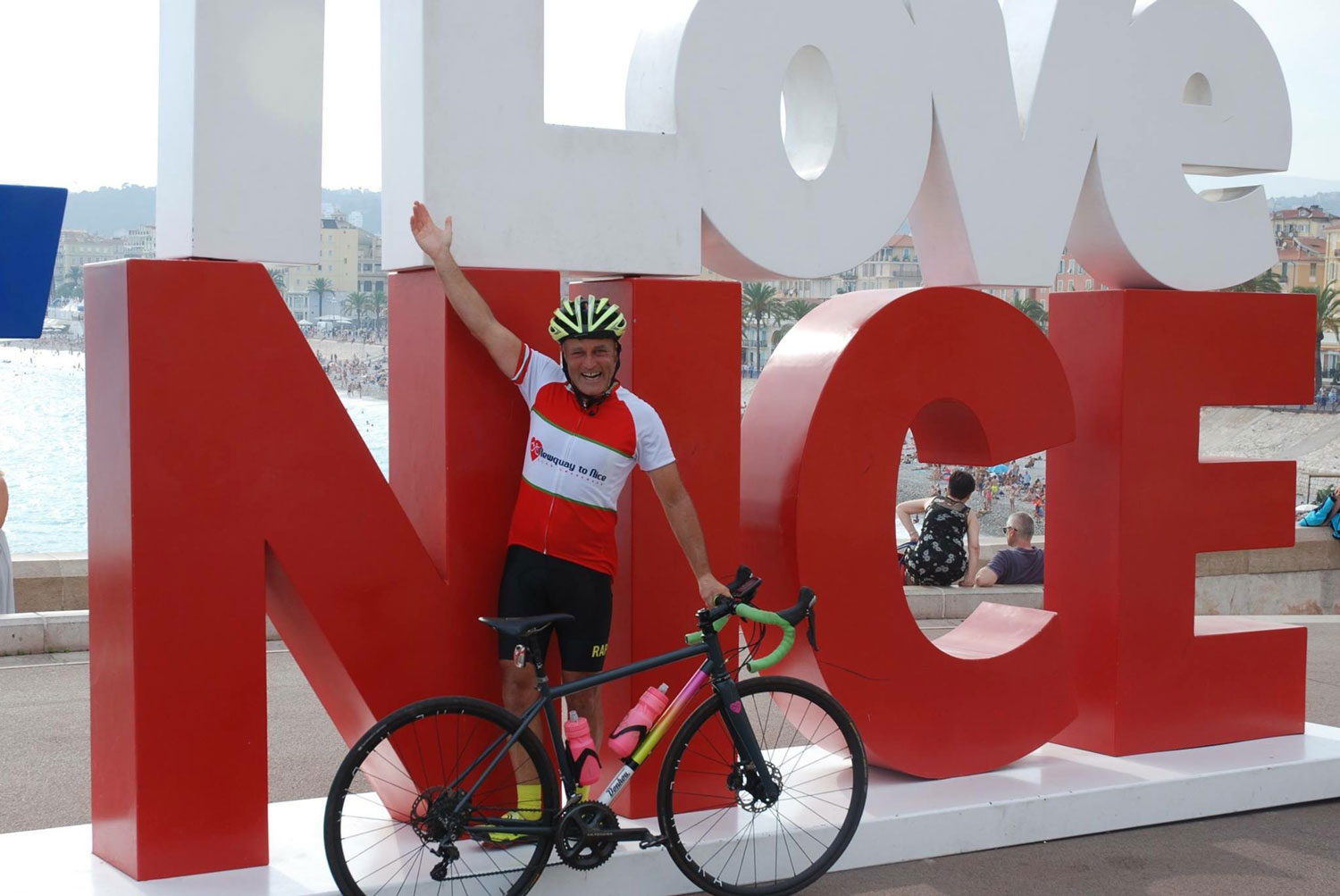 David Wring’s wife Sarah had a series of heart attacks 15 months ago, caused by SCAD. They are both committed to raising awareness and funds for Beat SCAD and the SCAD research project in Leicester, so David set himself a massive challenge of cycling from their home in Devon to Nice – more than 1,100 miles.

“Sarah was incredible lucky to be correctly diagnosed at Truro Treliske Coronary unit by a cardiologist Dr Audrius Simaitis, who had recently attended a cardiology seminar in New York and, fortunately, a discussion group about SCAD. But this element of luck needs to be reduced,” said David.

Cycling 1,300 miles is no mean feat, but David explained why he took on the challenge: “I wanted to do something my friends would believe to be outside of my ability, so I chose to ride my bike from our home in Newquay to Nice – the Atlantic to the Med. I needed to buy a new bike obviously!”

“I designed a cycle jersey and had it made up. The design incorporates the heart and the bike – my new bike, Aldo, also has the logo on it.” The bike is a hand-built Donhou and the logo is hand sprayed into the finish.

He described the first part of the route: “I rode from my home in Newquay to Plymouth docks to Roscoff, then rode to Morlaix then Renn then St Malo, where I joined my support team Green Jersey French tours. We then cycled to St Michel – approx 80 miles per day.

Then we had a hilly tough day to Bonnet then onto Peyrat le Chateau, at which point I had cycled over 600 miles – and was still not half way! The country is spectacular and vast with enormous fields of sunflowers to take your mind off the long journey and sore bum!”

David made a point of telling absolutely everyone he met on his journey about SCAD, helping raise awareness, and he obviously made an impact. “One chap I met, Edwin, an expert in malaria research at Plymouth University, cycled with me from Roscoff to Morlaix, helping to carry my bags,” he said. We said goodbye at Morlaix and on his return to UK he donated £50!”

On his designated day off he met two rugby players, who offered him £200 to ride up Mont Ventoux. He was also challenged to wear a tricolor club jersey (see photo). He accepted both challenges. 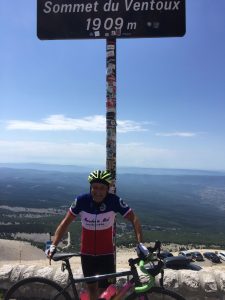 Towards the end of the challenge, he cycled from Gorges de L’Ardeche to Vaison la Romaine. “After the climb out of the gorge, the most stunning road opened up and the ride along the top of the gorge was simply the most spectacular I have ever ridden. After the gorge, we then crossed the Rhone and into Provence following the mighty Mont Ventoux with its white stone cap. The heat was intense – at 39ft my water bottles were really warm, which made hydration tough and no businesses were open and the roads and streets deserted.

“The journey became painfully slow but eventually we made the hotel and, with 2 litres of cold water drunk, the dizziness passed. I’ve never known a taste so sweet as that cold water and it will be one of my top memories.

On the penultimate day, David had “a spectacular day riding through the Gorges Du Verdon, in south-eastern France. It’s a river canyon with loads of man-made beaches along the edges and it is considered to be one of Europe’s most beautiful areas – I would have to agree it’s stunning! It is about 25km long and the granite walls tower above and in places overhang the road. Awesome scenery throughout, which eased the gradient! Total miles ridden 1,069.”

David completed his cycle in the beautiful city of Nice on 24 July – saddle sore, aching but celebrating his fantastic achievement. 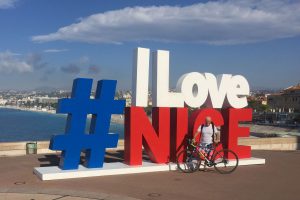 Dave at the end of his mammoth ride in Nice

The generosity of the people he met and those who have donated via his Just Giving page has been fantastic, but one man stuck in David’s mind.

“When I took a taxi from Clifton Bristol to Temple Meads train station, the driver was Mohammed, a Muslim immigrant from Somalia, in full dress and skull cap. We chatted for the entire journey and when he dropped me off I asked what the fare was. He told me it was £10 and as I went to the boot to collect my bags he extended his hand we shook hands. I felt paper in my hand he closed it and wished me and Sarah good luck. I thought it might be a prayer but it was a £5 note! It made me genuinely cry as this was more than he could possibly afford!”

He has so far raised £2,327 and is hoping to reach a grand total of £2,500. The Just Giving page is still open, so click hear to donate to help further research into SCAD. 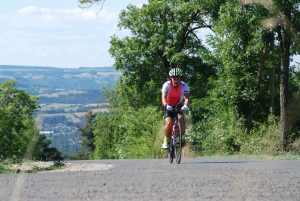 David’s determination to complete the challenge can be summed up by his comment about the punishing climb up Mont Ventoux: “I constantly thought of Sarah on the climb as the heat and the pain in my legs were unbearable, but Sarah has never once complained about her SCAD episodes so my effort was nothing in comparison!”

Well done and a massive thank you to David (and his support team) for completing this mammoth challenge. We hope your aching muscles recover soon!

See below for a slideshow of more photos from David’s trip. 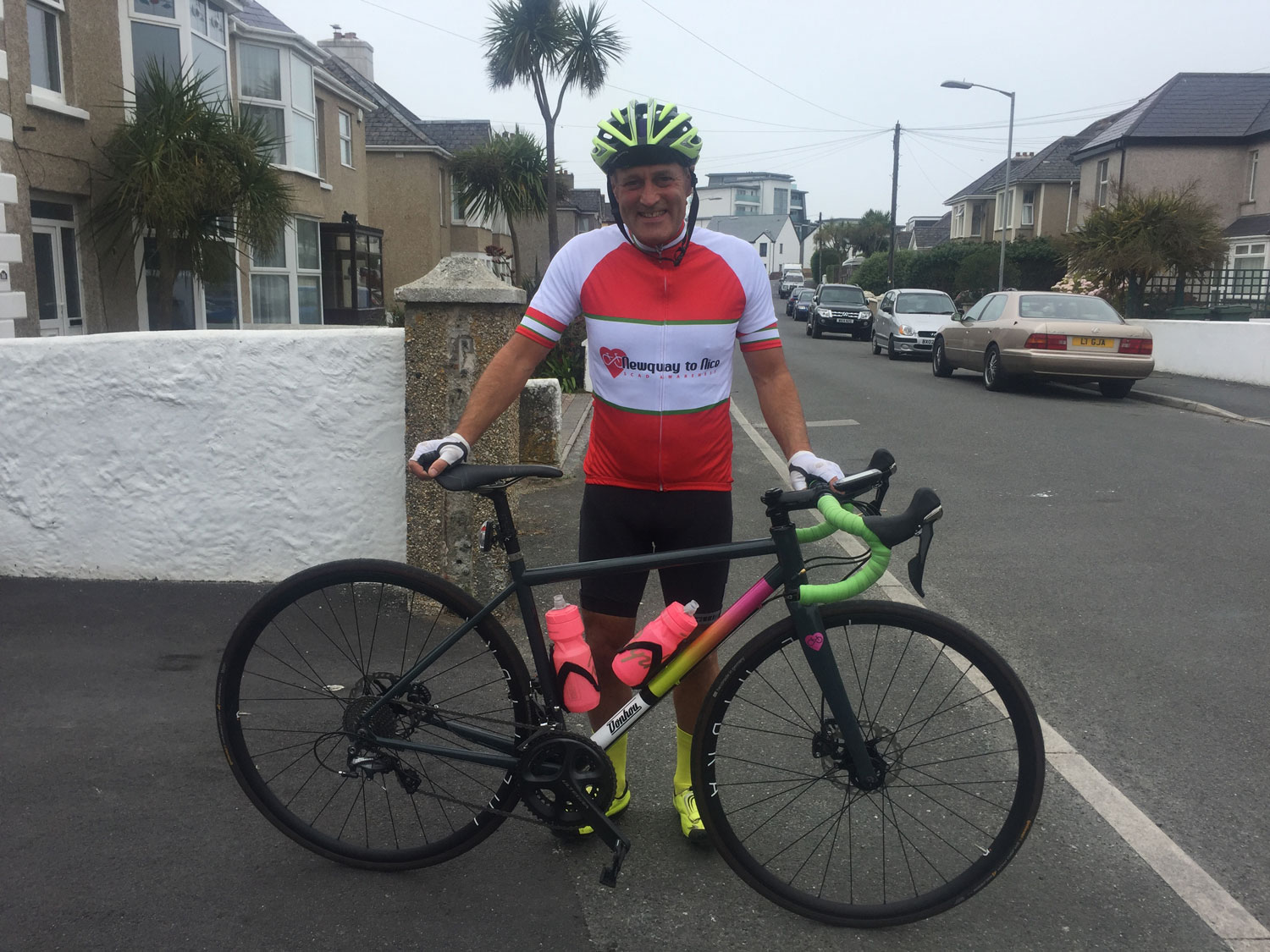 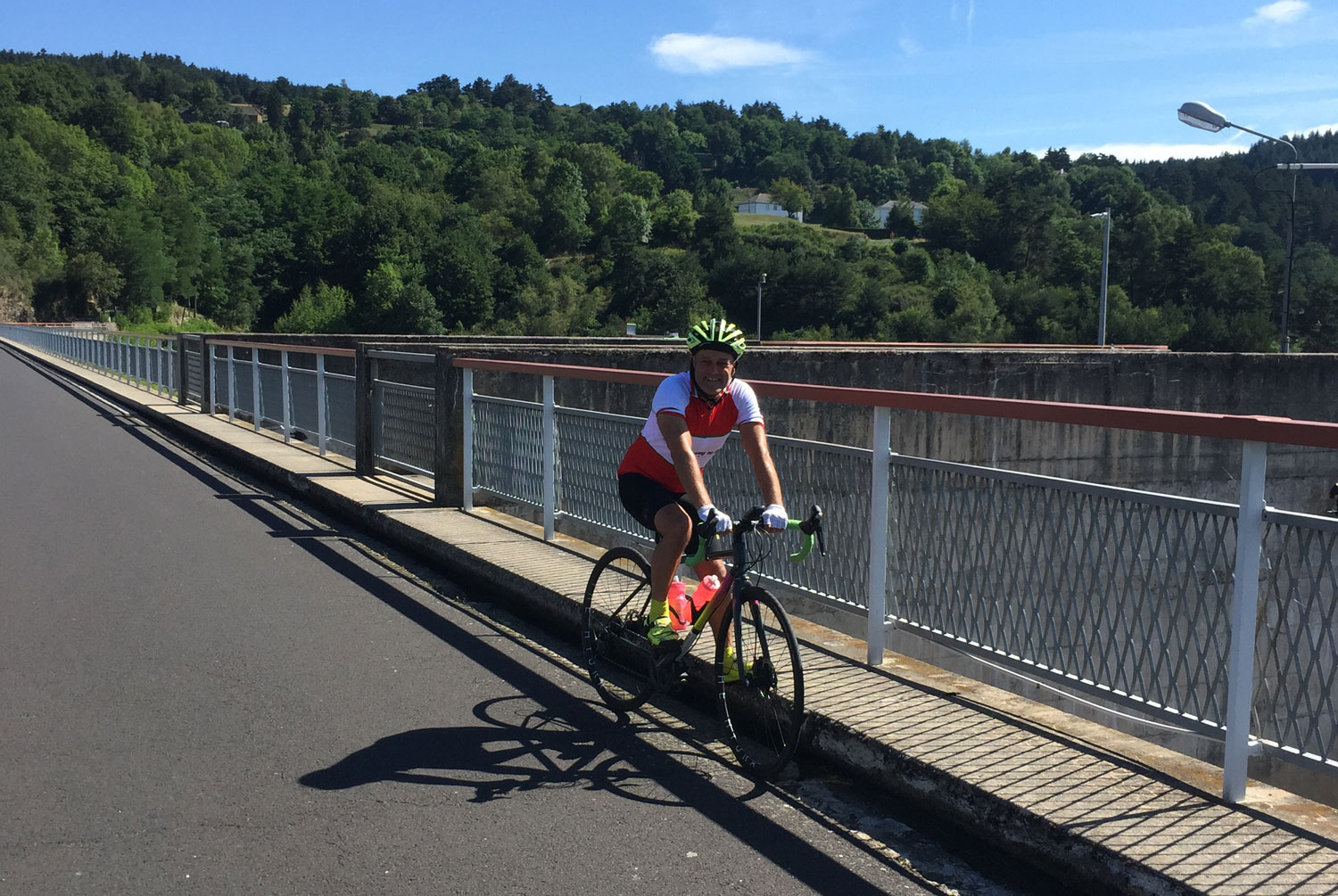 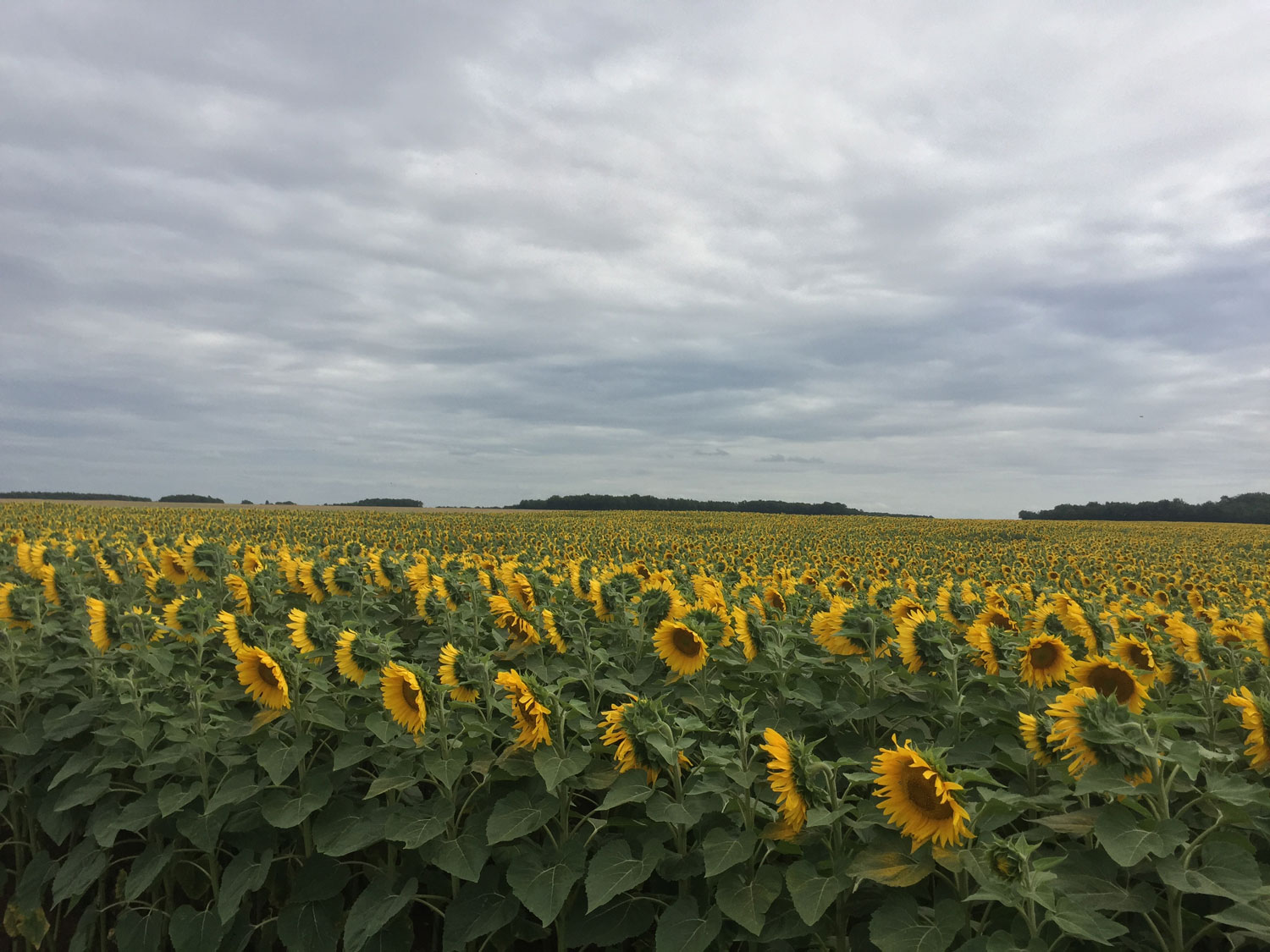 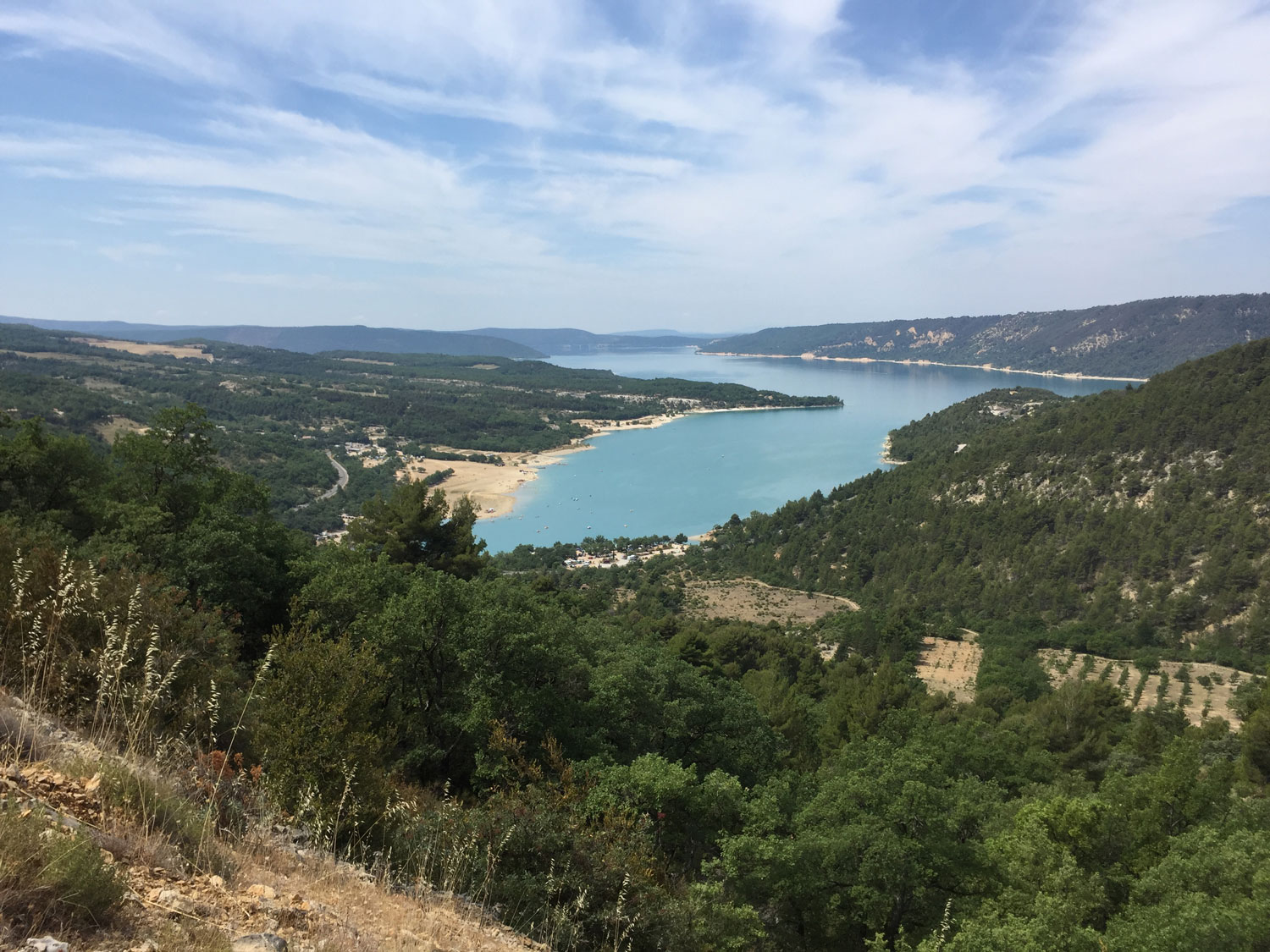 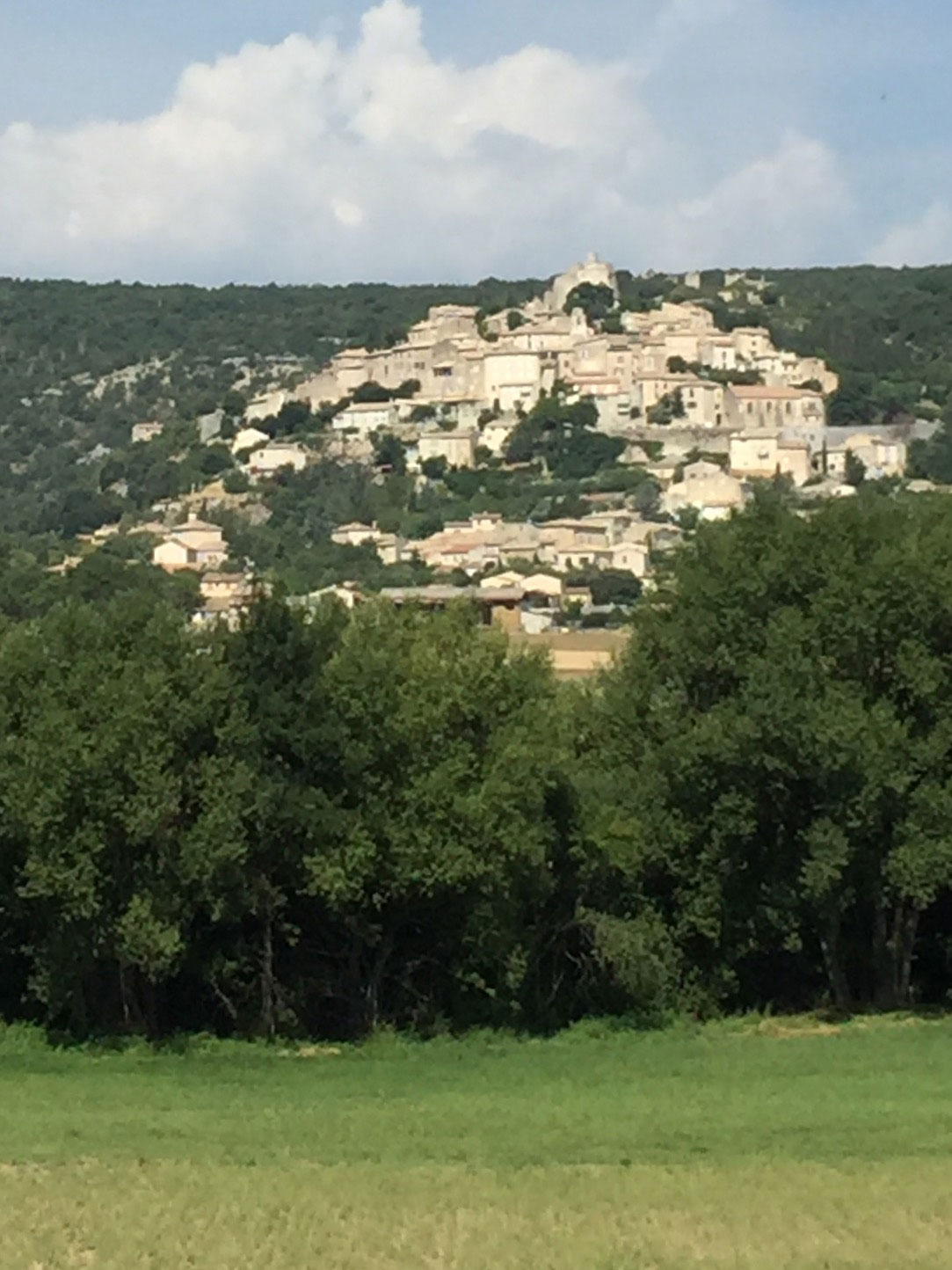 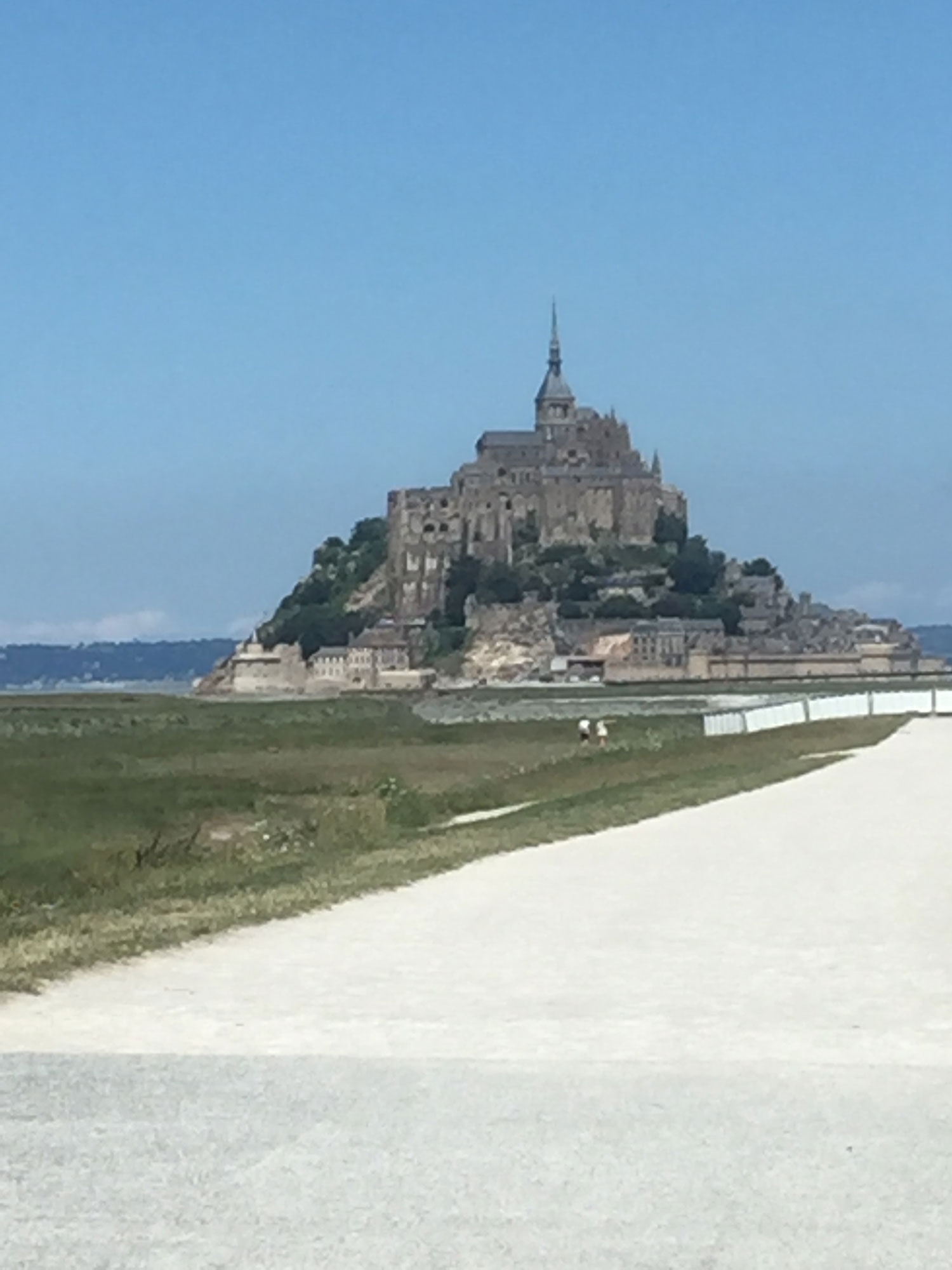 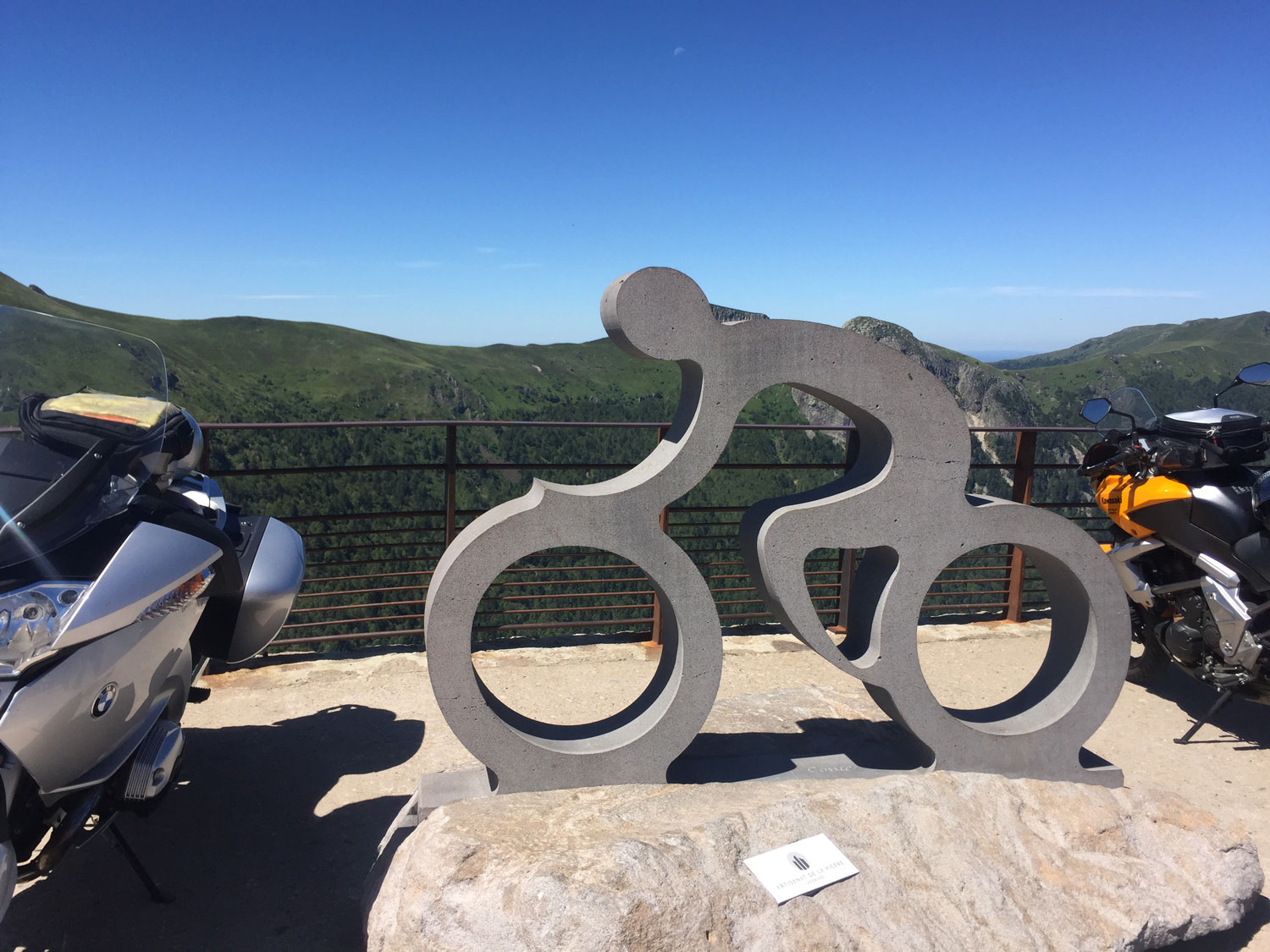 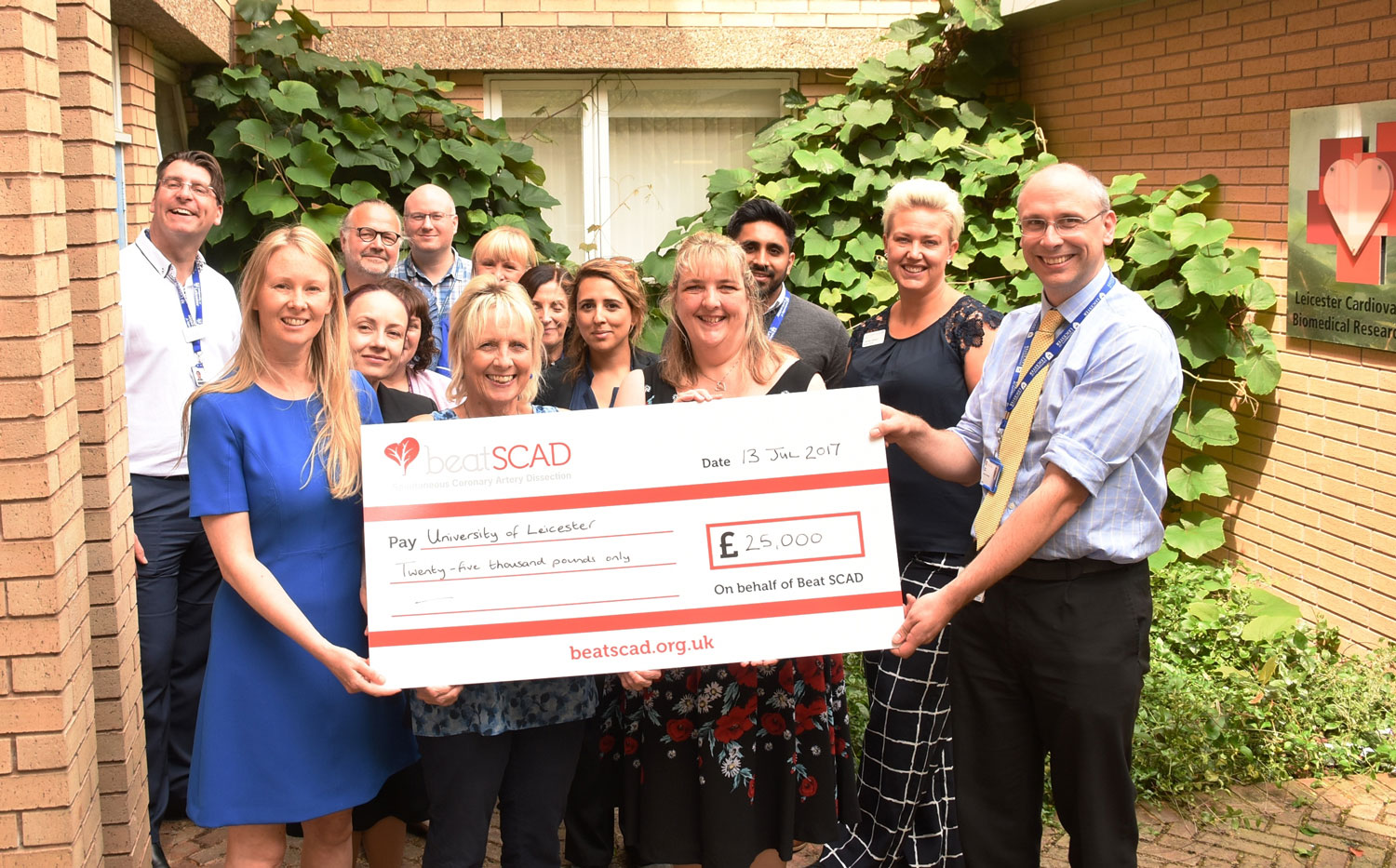 Thursday 13th July 2017 was a landmark day for Beat SCAD following the presentation of a £25,000 donation to the SCAD research project in Leicester.

Thanks to the hard work and generosity of the SCAD community, Beat SCAD Trustees Rebecca Breslin, Karen Rockell and Debbie Oliver (pictured above) were overjoyed and immensely proud to hand over the sum that will be used towards the salary of the new Clinical Research Fellow, Dr Alice Wood (pictured below left, with Dr David Adlam, who is leading the UK SCAD research project).

Dr Wood is a UCL graduate who joins the Leicester team to replace Dr Abtehale (Abi) Al-Hussaini who is returning to London to a consultant position. Dr Abi will remain involved in the SCAD research programme, as well being available to treat SCAD patients during her weekly specialist clinic. 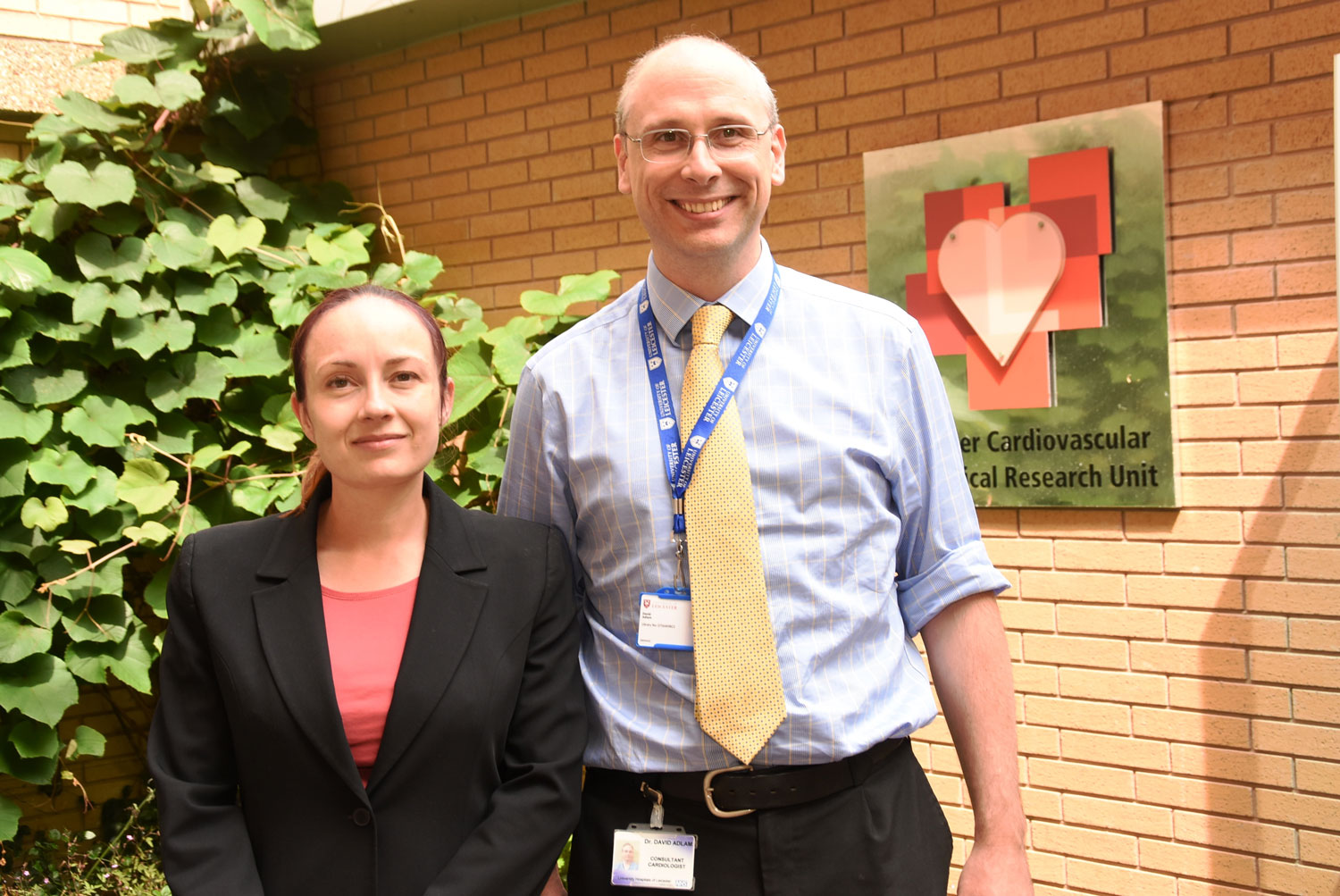 Since the launch of Beat SCAD in 2015, SCAD survivors, family members, friends and work colleagues have been incredibly busy completing an array of individual and team challenges as well as organising and participating in Beat SCAD events including ‘Scones for SCAD’ bake sales and walks to help raise this fantastic amount for the research programme.

Please take a moment to catch up on highlights of Beat SCAD’s first year by watching our achievements video and reading the annual report.

Beat SCAD Trustee Chair Rebecca Breslin said: “This is our first Beat SCAD donation to the research and we are so happy to present this on behalf of our patient group and supporters. It is exciting to see the money raised being put into action to further the research.

“The research is hugely important to us all and we will do everything we can to fund it to find the answers we are looking for to understand SCAD. It is vital that we keep pushing forward so we must raise more money and find other funding sources.”

Dr Adlam said: “On behalf of the research team at Leicester’s Hospitals and the University of Leicester, I would like to thank Becks and everyone at the Beat SCAD charity for their support and hard work in raising the funds to continue with this important area of research.”

After the presentation, the Trustees met with Dr Adlam, Dr Abi, Dr Wood and Cardiac Research Nurse Ellie Clarke and discussed the research status in the UK, Europe and Worldwide plus plans for next steps with the programme, including additional research team members: scientist Anna Baranowska and NHS-funded academic Dr Marios Magaritis.

Dr Adlam said: “This is an exciting time. Abi is working frantically to analyse the data collected so far and prepare articles for review and publication. We look forward to continuing to work with Dr Abi in her new consultant role in Chelsea and Westminster and welcoming Dr Wood, Dr Magaritis and Ms Baranowska to the SCAD research team. Rest assured we are working flat out with our collaborators around the world to find the answers patients are asking for.”

Rebecca added: “The UK SCAD research team is growing and research overall is increasing worldwide, which is absolutely fantastic. It really feels like progress is being made – even though we don’t have the answers yet, they feel much closer than five years ago when I had my SCAD. The Beat SCAD team feel even more compelled to raise our game with spreading awareness and raising funds for the research.”

Thank you to everyone who has supported us in any way to further the Beat SCAD mission – whether by helping to spread the word about SCAD, being a part of the support network to help others affected by SCAD, volunteering, donating, organising or participating in events. This donation is a result of your hard work and dedication to this cause.

Click here for more information about the SCAD research.